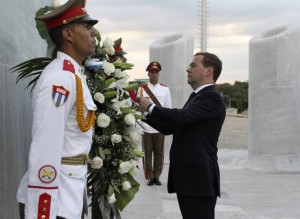 Yesterday was the first anniversary of Pussy Riot’s public performance of their Punk Prayer in a Moscow Orthodox Church. Group member Yekaterina Samutsevich tells Reuters that their aim was ‘to start a discussion in society […] of the merging of the church and state’, and that she doesn’t regret the performance.  Two women wearing balaclavas were detained briefly by police yesterday outside of the same Moscow Church, Christ the Saviour Cathedral.  Stanislav Belkovsky says he won’t withdraw his criticism of the Orthodox Church, published in an article last week, despite a summons from lawmakers for questioning in connection with the piece.  It is rumoured that more Duma deputies will follow Vladimir Pekhtin’s example and resign their seats in a Kremlin bid to ‘try to clean up United Russia’; Anatoly Lomakin will become the fourth party member to quit the Duma since October.  Sergei Ivanov says that no one in Russia should be immune to prosecution for corruption, including high-ranking officials.  Kremlin officials are backing down from earlier allegations of murder against a Texas woman whose adopted Russian son, Max Shatto, died last month, as the U.S. ambassador to Russia calls on the country’s authorities to put an end to ‘sensational exploitations’ of Shatto’s death.  Musician, producer, and orphan Andrei Razin has officially joined United Russia, seemingly, says RFE/RL, ‘to advocate for Russia’s hundreds of thousands of orphans’.

Alexander Bastrykin, the head of the Investigative Committee, says the country needs a financial police force to prevent illegal capital flight and corruption. Many see former presidential candidate Sergei Glazyev as ‘a leading contender’ for the role of Central Bank chairman: the successor to Sergei Ignatyev will be nominated by Vladimir Putin in one month.  Oleg Deripaska is holding talks on the fate of an unprofitable $200 million port built for the 2014 Sochi Olympics.

The U.S. says that Russia and China are ‘aggressive’ players at cyber-espionage and says it expects both to continue to attempt to obtain ‘sensitive U.S. economic information and technologies’ through the web.  New York-based Schneerson Group has rejected Vladimir Putin’s suggestion to publicly display a disputed collection of historic books and documents at a Jewish museum in Moscow.  Russia is to lease $650 million worth of jets to Cuba and partially write off its multi-billion-dollar Soviet era debt.  Measures to curb alcoholism and smoking may not be enough to increase Russians’ life expectancy, say health advocates.