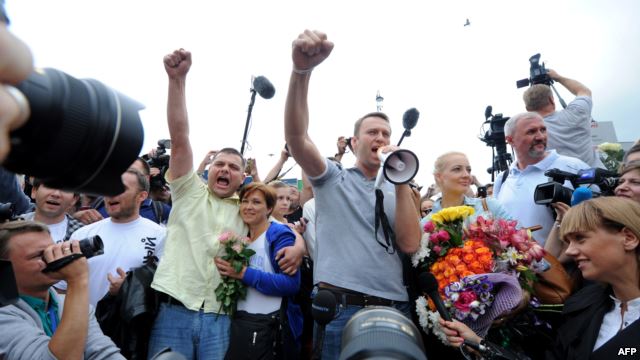 A day after his release from custody in Kirov, Alexei Navalny has returned to Moscow, welcomed by hundreds of supporters, both on the ground and online.  Navalny praised his followers, crediting them with his release (Reuters agrees), and confirmed his intention to run for Mayor in September. RFE/RL has video of his arrival.  Most are baffled by his release, bizarrely and unexpectedly ordered by his own prosecutors.  Political analysts speculate that the authorities ‘want Navalny to run in the election because they see him as having little chance of winning’, or because it lends legitimacy to Sergei Sobyanin’s bid for reelection as Moscow Mayor.  The court’s treatment of Navalny indicates an ‘open rift’ in government and ‘reflects confusion in President Vladimir Putin’s inner circle about how to deal with its No. 1 foe’, says the Washington Post.  Navalny’s sentencing caused Russian stocks to plummet the most in a month, as investors baulked over concerns about the rule of law.  Navalny’s supporters who left graffiti and stickers on the walls and doors of the State Duma following a rally against his conviction could face jail sentences.  A young member of the political opposition, municipal deputy Vera Kichanova, talks about younger opposition politicians working for change in Russia.

Vladimir Putin’s spokesman, Dmitry Peskov, said that Navalny’s release had nothing to do with the President, who promptly did a dive to examine a 19th century wreckage in Lake Baikal, possibly a bid to boost his popularity in the wake of the Navalny sentencing.  A small protest was held in Voronezh yesterday against plans to open a nickel and copper mine in the region.  Patriarch Kirill, the head of the Orthodox Church, says that the legalisation of same-sex marriage marks ‘the coming of the apocalypse’; this piece looks at Russia’s ongoing anti-gay crackdown.  A criminal case has been launched into alleged embezzlement at RusHydro.  The Federal Tax Service has accused election watchdog Golos of owing over $70,000 in back taxes on foreign funding.

A lawyer for convicted Pussy Riot member Maria Alyokhina denies a report that her client was beaten by prison guards.  The British authorities have stated publicly that they blocked an inquiry into the death of former K.G.B. officer Alexander Litvinenko due to ‘international relations’.

PHOTO: Aleksei Navalny (center) addresses supporters and journalists upon his arrival at a Moscow railway station on July 20. (AFP)