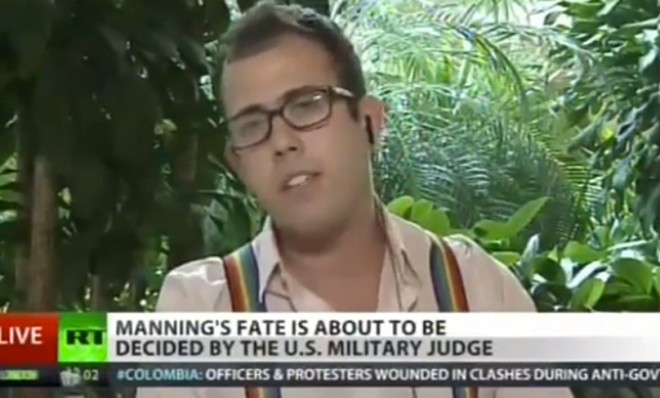 American journalist James Kirchick appeared on ‘Kremlin-funded propaganda network’ Russia Today yesterday to speak about Bradley Manning, but took the opportunity to speak instead against Russia’s ‘horrific environment of homophobia’, criticising the channel for having been ‘Bradley Manning and Edward Snowden 24-7, I haven’t seen anything about the anti-gay laws’.  RFE/RL has the video and a transcript.  The Miss Universe Organization said that the ‘gay propaganda’ law is ‘diametrically opposed’ to its ‘core values’.  Russia has slammed the U.K. for failing to live up to its own standards on human rights for ordering the Guardian newspaper to destroy material leaked by NSA whistleblower Edward Snowden.  Kremlin advisor Sergei Glazyev has warned that Russia may annul its free trade agreement with Ukraine if Kiev signs an agreement with the European Union.  Russia blocked a Greenpeace ship from entering Arctic waters yesterday, preventing a protest against Rosneft and ExxonMobil.

The acting governor of the Moscow region has vowed to close all of the city’s illegal street markets before the end of the year.  The migrant camp in the city’s Golyanovo district has already been closed down.  St. Petersburg official Vitaly Milonov has lodged a complaint with the Investigative Committee over the canvassing materials of Moscow mayoral hopeful Alexei Navalny, alleging that they contain ‘elements of libel’.  Reuters says that Navalny has turned the opposition into a ‘hero cult’, because his ‘charisma matters more than his politics’.  The Moscow Times looks at some of his more unconventional campaign tactics.  United Russia’s candidate for the mayoral post in Yekaterinburg has been chasing down would-be voters in a minibus.

The central bank has named an insider as its new markets regulator, as part of its bid to develop a domestic investor base.  Moscow police supposedly foiled a murder plot against the president of Fondservisbank.  Zombie pigeons take Moscow.

PHOTO: James Kirchick speaks out against anti-gay laws during a Russia Today broadcast.