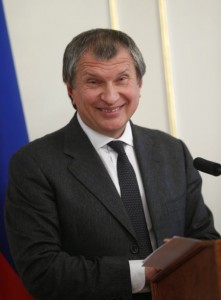 Rosneft has finalised its deal to acquire TNK-BP in a $61 billion cash-and-shares takeover (this figure includes funds paid by Rosneft for 100% of TNK-BP and the money that BP will pay for Rosneft shares; BP is selling its half of the joint venture for $27 billion).  The Moscow Times sees it as both a strengthening of state influence in the oil sector, as well as a show of Russia’s ‘benevolence to foreign capital’, because Rosneft will cede almost 20% of the new company to BP.  President Vladimir Putin praised the deal as ‘a very good signal for the Russian market.  It is a good, large deal’; many see it as marking Russia’s oil reserves as ‘off limits’ to other international companies.  The results of the opposition’s election for its 45-member Coordination Council were announced on live television last night, with Alexei Navalny winning the most (43,723) votes, followed by Dmitry Bykov, Garry Kasparov, and Ksenia Sobchak (the full list of elected members is here).  Masha Lipman described the vote as the opposition’s ‘very first attempt at organising the protest movement.’

Opposition activist Leonid Razvozzhayev has signed a ten-page confession admitting to plotting to cause mass riots, but his lawyer says she believes that he was tortured into confessing because she was not allowed to see him, a suspicion corroborated by Razvozzhayev’s own claims (captured on video and circulating online) that he was abducted in Ukraine, to where he had fled seeking asylum, and tortured for two days.  The Investigative Committee rejects claims that Razvozzhayev was tortured into his confession.

U.S. Presidential hopeful Mitt Romney vowed to give Putin ‘more backbone’ if he was elected; Barack Obama mocked him, quipping that the 1980s want their foreign policy back.  The Duma devoted much of yesterday’s parliamentary hearing to discussing human rights abuses in the U.S.