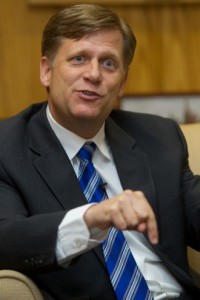 A Russian court has rejected a $10 million compensation claim against pop star Madonna by a group of activists who claim the pro-gay message promoted by the singer at her St.Petersburg concert ‘hurt their feelings’.  The court appeared unconvinced by the claimants’ suggestion that the performance could damage Russia’s birthrate.  Madonna is among those selling Pussy Riot T-shirts, but does she have the band’s approval?  In another sign that the activists’ image may be being exploited, a new book, allegedly written by Nadezhda Tolokonnikova, was apparently printed without her consent.  Jailed band member Maria Alyokhina has requested a transfer to solitary confinement as a result of ‘strained relations’ with her fellow inmates.  After watching One Hour and 18 Minutes by Elena Gremina, the play which examines the death in custody of lawyer Sergei Magnitsky, Soviet-era whistleblower Vladimir Bukovsky sees little change for human rights in Russia.  Russian investigators will not investigate allegations by activist Leonid Razvozzhayev that he was tortured by police.  Thanks to the new law on ‘foreign agents’, the U.S. based NGO National Democratic Institute will downsize their Russia base.

Yesterday saw BP, Rosneft and its main shareholder Rosneftegaz officially sign a package of final and binding agreements detailing the sale of BP’s 50% stake in TNK-BP to Rosneft.  Gazprom is planning a $2 billion investment in Belarusian natural-gas pipeline infrastructure in order to increase gas transit to the EU by 30%.   A weapons designer from the Central Sports and Hunting Weapons Research and Design Bureau has been shot dead in the city of Tula in what appears to be a contract killing.  NATO chief Anders Fogh Rasmussen has rejected Russian criticism of plans to deploy of Patriot missiles near Turkey’s border with Syria after ministry spokesman Alexander Lukashevich described the move as ‘an alarming signal’.

British books and stationery retailer WH Smith Plc is planning a foray into Russia for 2013.  In a deal with Canada’s Magna, Avtotor, Russia’s biggest maker of foreign-branded cars, will build 21 new factories.   Russia’s deputy prime minister Arkady Dvorkovich attempts to promote the idea that ‘Russia is a normal country’.