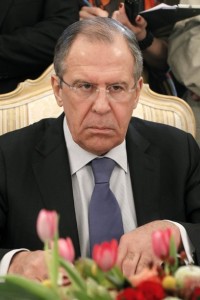 The biggest infrastructure contracts awarded by City Hall in 2011 and 2012 reportedly went to companies co-owned by close allies of President Vladimir Putin.  Prime Minister Dmitry Medvedev denies that the U.S. and Russia are entering a new cold war, and expressed optimism that the two sides will be able to cooperate on various issues.  Over 50% of Russians have a positive attitude towards the U.S., but just 39% share Medvedev’s optimism about bilateral relations, according to VTsIOM.  U.S. Secretary of State John Kerry will meet with Foreign Minister Sergei Lavrov in Berlin today.  Russia and the U.S. however are exhibiting rare cooperation in Olympic training sessions at an Alpine ski resort, where they are sharing global training facilities.  Vladimir Putin has announced that Russia will not return documents to the Schneerson Collection in New York, but, notes this piece, ‘the Soviet government appropriated huge amounts of property after the 1917 revolution, includiong factories, banks and assets’, and has not returned any of these spoils either.  Lavrov has accused the European Union of double standards in allowing nondiplomatic Ukrainian officials to enter member states without visas. ‘A Ukrainian bureaucrat is no different from a Russian one,’ he said.

Russia agreed yesterday to supply an annual 38 billion cubic meters of natural gas to China, with a cooperation agreement due to be signed in the coming months and expected to make Gazprom China’s main supplier.  Gazprom’s prices are to fall in the next quarter, for the first time in years, supposedly in a bid to curb spending.  Immigration laws for investors have been relaxed, with the Federal Migration Service creating five-year visas for even ‘less affluent expats’.  A number of British media groups are to challenge their government’s alleged attempts to withhold evidence from the inquest into the murder of Alexander Litvinenko in 2006.  A new law that requires companies to hire disabled people has been praised by Duma deputy Oleg Smolin, who called it ‘a first step forward’.

‘You may be surprised to learn that the Kremlin has a human rights agency,’ writes Jeffrey D. Kahn, in an article addressing the ‘courage’ of Lyudmila Alexeyeva and other long-standing Russian rights experts.  Gérard Depardieu arrived in Grozny, Chechnya this weekend after taking up his Russian residency, taking part in a dance performance at the home of President Ramzan Kadyrov.  He is reportedly planning to shoot a film in the region.