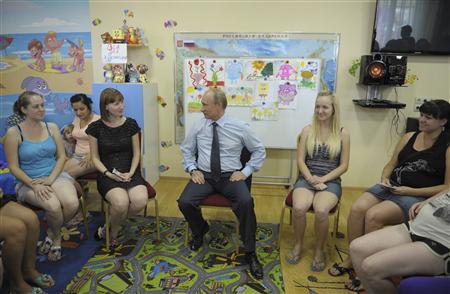 Investigative Committee head Alexander Bastrykin has accused officials in the town of Krymsk of lying and backdating documents to make it look as though they had given residents plenty of warning about this month’s flood.  Boris Kagarlitsky praised the volunteerism in Krymsk that has united activists and OMON police officers in a common cause, and Vladimir Putin made his third visit to the town, promising that the government will rebuild all homes destroyed in the flood by November.  A director of Golos explains why the organisation will neither refuse foreign funding nor agree to the label ‘foreign agent’ when the new law – which he calls ‘a form of government blackmail’ – comes into force.  Russia has accused the U.S. of trying to justify terrorism against the Syrian government after it failed to condemn a bomb attack that killed senior security officials, and branded new E.U. sanctions as ‘counterproductive’.

Anti-corruption blogger Alexei Navalny says he is being followed by four unmarked police cars, and other opposition figures say they too are under surveillance. ‘It’s more of a level of psychological pressure than an effective surveillance measure.’  The Kremlin is reportedly stockpiling drones to help it spy on street protests.  Media tycoon and high-profile supporter of Navalny, Alexander Lebedev, says he realises he could face jail for his critique of Vladimir Putin’s rule.  The billionaire, who recently joined the board of Aeroflot, has alleged that the state illegally siphoned off as much as $1 billion from the company as ‘overflight fees’, preventing minority shareholders from receiving payouts.

Bloomberg looks at the worst-case scenario for the Russian economy if the euro-zone debt crisis escalates, as the central bank chairman says changes to the balance sheets of Russian banks have strengthened the financial sector against external shocks.  TNK-BP says it would welcome Rosneft as an equal partner, should BP decide to sell its stake. ‘We have a lot of synergies with Rosneft. I think there is nothing bad in this. TNK-BP’s market capitalisation would only grow.’  The Independent eagerly anticipates the revelations (‘oligarch porn’) that are likely to be made during Michael Cherney’s lawsuit against Oleg Deripaska at the High Court in London.