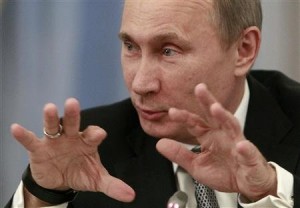 A spokesperson for the Ukrainian Interior Ministry confirmed that activist Leonid Razvozzhayev was abducted in Kiev last week, stressing that it was not a criminal issue, and that his captors were likely to have been ‘security forces of other countries’.  Ukraine’s opposition party slammed Viktor Yanukovych’s party for ‘letting’ Razvozzhayev be kidnapped when he was seeking asylum.  Russian officials are denying any abduction, but many see this as a turning point in government relations with the oppositions. ‘Either we head toward an openly fascist regime, or we stop it now.’  Razvozzhayev has retracted his signed confession admitting to plotting mass riots, saying that he had originally testified under pressure.  Officials in Krasnodar have banned the celebration of Halloween in schools on grounds that it destroys childrens’ mental health.  ‘The new Putinism, you might call it, seems to be a fusion of two older Russian ideas: nationalism, sometimes with an anti-Western tinge, and conservative interpretations of Orthodox Christianity.’  President Vladimir Putin ‘has made many of his predecessor’s reforms disappear’, says the BBC.

Vladimir Putin met with Valdai Club members yesterday, including Russian and foreign economists and political analysts, and spoke on a number of issues.  He said that he had ‘mixed feelings’ about Rosneft’s purchase of TNK-BP, a deal which ‘is not in line with our trend to reduce the growth of the state sector’.  Mary Dejevsky says this suggests that Russia ‘is so concerned to encourage foreign investment […] that it will accept arrangements that might have been unacceptable before’.  Putin also took the opportunity with his international audience to accuse western media of hypocrisy in its coverage of Pussy Riot.  He also reiterated his earlier stance that the group received a fair punishment: ‘If they had not broken the law, they would now be at home, doing the housework, or back at their jobs.’  His spokesperson, Dmitry Peskov, says claims that Putin needs surgery for a back problem ‘do not correspond to reality’.

Investigators raided the office of Defense Ministry agency Oboronservis as part of a criminal case of property fraud, drawing suspicion that Anatoly Serdyukov’s reputation will be damaged.  The Investigative Committee says it suspects officials at the ministry of using the company to sell valuable assets at prices below market value.  Virgin boss Richard Branson will visit Russia to lobby the Kremlin to allow his airline to fly to Moscow.  Transparency International criticised a government program that distributes funds to nonprofit organisations for lack of transparency and possible conflicts of interest.

The new Georgian president, Bidzina Ivanishvili, has vowed to improve relations with Russia.

PHOTO: Russia’s President Vladimir Putin speaks during a meeting of the Valdai international discussion group of experts at the Novo-Ogaryovo residence outside Moscow October 25, 2012. (REUTERS/Sergei Karpukhin)