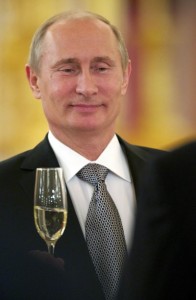 Billionaire businessman Alexander Lebedev has been charged with public disorder and battery and faces up to five years in prison.  The charges have been brought in connection with Lebedev’s punching a real estate mogul on national television last year; he says they are ‘completely made up’ and politically motivated.  The AAR consortium which owns half of TNK-BP is interested in buying out BP’s entire 50% stake and will make an all-cash offer next month in a deal that is currently estimated to be worth $20 – 25 billion.  Political youth group Nashi is offering an $18,000 reward to anyone who provides information on the whereabouts of the free remaining members of Pussy Riot, as police seize t-shirts depicting the group and arrest the artist who was selling them in Novosibirsk.  A Moscow court has ruled that the arrest of Sergei Udaltsov at an anti-government march last month was illegal.

U.S. presidential candidate Mitt Romney has come under fire for ‘a presumed lack of patriotism’ for investing in Gazprom and Yandex through his equity fund.  The Duma’s new bill to punish blasphemers would see guilty parties fined up to $16,000 or put in jail.  Vladimir Putin has reiterated his position that interfering in Syria would be counter-productive, as Foreign Minister Sergei Lavrov called on members of the Syria Action Group to adhere to their agreements.  According to Bloomberg, the Kremlin’s shutting down of USAID’s operations in Moscow means ‘the Cold War is back’.  Russia anticipates the value of its weapons exports to reach $11 billion this year.

Dmitry Medvedev’s Cabinet is negotiating with the presidential administration over the fate of Rosneftegaz’s $4.2 billion holdings, the latest development in his ‘turf war’ with Rosneft president Igor Sechin.  Anders Aslund describes Gazprom as ‘the most mismanaged and corrupt company of its size in the world’.  Moscow City Hall is seeking ‘tens of billions of dollars’ to fund infrastructure and housing projects over the next three years.  German lawmaker Marieluise Beck says she will continue to file visitation requests with the government of Karelia, where Mikhail Khodorkovsky is being held, despite being barred from meeting him thus far.

PHOTO: Russian President Vladimir Putin toasts during a ceremony in which the diplomatic credentials of newly appointed ambassadors were accepted at the Kremlin in Moscow September 26, 2012. REUTERS/Alexander Zemlianichenko/Pool