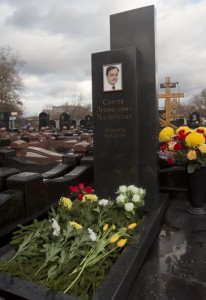 A Moscow court has set preliminary hearings in the posthumous case against lawyer Sergei Magnitsky for February 18, as his family members say they have no nope of his being given a fair trial.  The Washington Post says the Magnitsky case ‘has become a byword for Russian corruption’; and the New York Times slammed the attempt to begin the hearing yesterday, noting that ‘it was unclear who or what, exactly, went on trial’, given ‘the empty-chair prosecution’ and the fact that the Magnitsky family’s laywers refused to participate.  His mother is calling on all lawyers in Moscow to boycott the trial.  Anti-corruption activist Alexei Navalny has appealed to the European Court of Human Rights seeking $6,000 in damages from Russia for his detention at a protest camp last May, which he says was unlawful.  Masha Gessen is calling on world political leaders to boycott the G20 Summit meeting this September, and next year’s Sochi Olympics, in a bid to show support for Russia’s minority opposition in their critique of measures to impose a nationwide ban of ‘homosexual propaganda’.  Vladimir Pozner, a state television presenter, apologised for what he claims was an accidental slip of the tongue that caused offense to Duma deputies. His apology was an attempt to halt the Duma’s retaliatory threat to propose a ban of critical foreigners from state television (Pozner holds Russian, French, and U.S. passports).

President Vladimir Putin has dimissed Magomedsalam Magomedov from his post as the leader of Dagestan.  Putin’s call for privatizations to be focused on the Moscow bourse could drain demand from VTB’s planned $2 billion stock offering, with analysts warning that the exchange is too small to supply all of the capital sought.  Oleg Deripaska has accused top Central Bank officials of lying about inflation.  Vedomosti has named the two Russian billionaires suspected of being the joint buyers of a $4 billion, 38% stake in Polyus Gold as Zelimkhan Mutsoyev and Gavriil Yushvayev.  Hundreds of protesters in Phuket, Thailand, are calling for Russian-owned business to leave their country.

The $7 billion gas bill slapped on Naftogaz weakens Ukraine’s position ahead of its negotiations with the International Monetary Fund this week, at which it is hoping for a $15 billion loan.  Vladimir Zhirinovsky was pelted with cabbage at a news conference in Kyiv by a protester accusing him of ‘Ukrainophobia’.  Sergei Filin, the artistic director of the Bolshoi Ballet, says he forgives the unknown attacker who splashed acid in his face.

PHOTO: FILE – This Friday, Nov. 16, 2012 file photo shows a tombstone on the grave of lawyer Sergei Magnitsky who died in jail, at a cemetery in Moscow. A Moscow court on Monday Jan. 28, 2012 set preliminary hearings in the posthumous trial for Feb. 18. (AP Photo/Misha Japaridze, file)