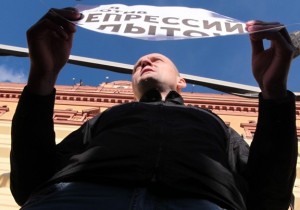 Opposition leaders Alexei Navalny, Ilya Yashin and Sergei Udaltsov were all detained on Saturday during an unsanctioned protest in support of arrested activists including Leonid Razvozzhayev.  The newly-formed opposition Coordinating Council convened its first meeting earlier that day, agreeing on a December rally and pledging to lobby Washington for an expansion of the Magnitsky sanction list.  The Investigative Committee has formally charged Sergei Udaltsov with plotting mass riots, which he denies.  A Guardian editorial suggests that Putin’s increasingly repressive stance on the opposition may be motivated by a challenge to his authority ‘from within’.  ‘They are taking tactics developed against terrorists and using them against political opponents.’  A Just Russia leader Sergei Mironov has warned against  party members’ dalliances with the Coordinating Council movement, as one United Russia deputy literally puts his foot down on it.

Tycoon and one-time presidential hopeful Mikhail Prokhorov has announced plans to dedicate himself entirely to the business of politics.  Included among the policies announced at his Civic Platform party congress was a call to reduce the number of unskilled immigrants entering Russia and abolishing ethnicity-based republics.  Capital Economics has a gloomy take on Russia’s economy which is, according to them, experiencing ‘a fairly sharp slowdown‘.  The Kremlin is reinforcing its foothold in Kyrgyzstan’s energy infrastructure with the construction of a number of Russian-built hydroelectric power stations.  Does Novatek have plans to break Gazprom’s hegemony in Europe?

The Kremlin has denied that action man antics have taken their toll on Vladimir Putin’s back.