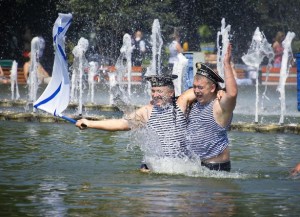 The trial of three members of punk protest band Pussy Riot begins today, and will be streamed live on the Internet, supposedly to allow the authorities ‘to exclude press from the very small courtroom, and at contentious moments to simply “lose the feed”‘, says their lawyer in an extensive feature.  Brian Whitmore assesses the contribution of Russian musicians to the protest movement.  This op-ed considers how drone technology is used to surveil protest actions.  It looks likely that anti-corruption blogger Alexei Navalny will be formally indicted on criminal charges related to a case closed in 2009.  The Rospil founder has accused Investigative Committee chief Alexander Bastrykin of breaking the law by using his position to advance his commercial interests.  The ex-deputy mayor of Moscow, Aleksandr Ryabinin, has reportedly received a suspended three-year jail sentence for fraud.  Prime Minister Dmitry Medvedev has suggested that he might consider running for President again.  Medvedev also argued that Russia’s stance on Syria was informed by ‘what happened in Libya’.  Moscow says it will refuse to comply with European Union sanctions requiring EU governments to search vessels suspected of carrying weapons into Syria.  Bloomberg discusses the Syria issue inter alia with Russia’s ambassador the UN, Vitaly Churkin, in a video interview.

In response to a lawsuit by a minority shareholder last year, a Siberian arbitration court has ruled that British oil giant BP should pay $3.1 billion in compensation to its Russian joint venture partner TNK-BP over the British company’s failed attempt to form an alliance with Rosneft.  The tension was apparently ‘palpable’ at a meeting in Sochi between Foreign Minister Sergei Lavrov and his Japanese counterpart, Koichiro Gemba, on the issue of the Kuril islands, but the matter was off the agenda at talks between Putin and Gemba.