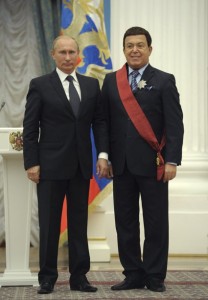 Alexander Lebedev is planning to give up his businesses in Russia due to pressure from the security services, who have allegedly installed surveillance devices in his homes and offices.  Lebedev believes that the pressure is linked to his attempts to expose corruption, rather than his opposition activity.  Gennady Gudkov will be expelled from the Duma for having business interests whilst serving in parliament, but the fact that this is ‘widely practiced in the parliament and government’ indicates that Gudkov is receiving special treatment (suspected to be linked to his opposition to President Vladimir Putin).  Russia’s pavilion has won the Venice Biennale for the first time.  Two of the oldest equity funds with investments in Russia are leaving Moscow, blaming the current global appetite for low risk investments.

Gazprom has agreed with partners Total and Statoil that the Shtokman gas field, at its current costs, is not feasible, and has put the project on hold.  The project, based in the Arctic, is worth $15 billion, and this new turn is seen by some as ‘a clear warning to investors that the Arctic was not “the land of milk and honey” the oil and gas industry claimed.’  Environmental activists want energy companies to reconsider plans to drill in the Arctic due to fears about potential spills and long-term damage stemming from insufficient clean-up technologies.  Carmakers in Russia have been reassured by the move to impose an automobile recycling fee on imports that will keep outside competition expensive, guarding against new WTO conditions, which shrinks import duties on used cars.  Reuters reports on the potential in Russia’s car market.

Georgian troops clashed with gunmen on the border of Dagestan, allegedly killing 11 militants.  The Moscow Times explains the conditions in Russia’s regime and settlement-style penal colonies in a bid to predict the future of the imprisoned members of Pussy Riot.  The Week has a round-up of the latest blows to freedom in Putin’s Russia.  Russia’s Olympics volleyball coach, Sergei Ovchinnikov, has been found hanged in Croatia.