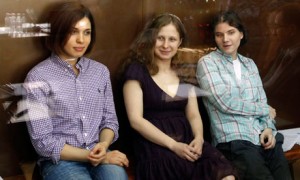 The three members of anti-Putin collective Pussy Riot, currently facing hooliganism charges in the same cage that once held Mikhail Khodorkovsky, will plead guilty to ‘ethical misdemeanours’.   Group member Nadezhda Tolokonnikova says, however, they will not plead guilty to an ‘offence punished by the Criminal Code’.  In fellow member Maria Alyokhina’s statement she commented : ‘I thought the church loved all its children, but it seems the church loves only those children who love Putin.’  Orthodox Church leaders are, apparently, unmoved by the trio’s apologies.  The attack on the girls will only serve to reinforce the protest movement, Natalia Antonova argues.  In Chuvashia, the charging of ten Jehovah’s Witnesses with criminal acts including extremism has raised concerns about religious tolerance, an issue flagged up by a new report from the US State Department which notes Russia ‘often failed to distinguish between peaceful religious practice and criminal or terrorist activities’.

Today opposition leader Alexei Navalny will return to the offices of the Investigative Committee for a second day of questioning regarding a 2009 investigation into losses at a state-run company.  This article ponders who is out to get the Committee’s head, Alexander Bastrykhin.  President Putin has raised eyebrows by appointing adversary Sergei Glazyev to a position coordinating affairs in the Belarus-Kazakhstan-Russia customs union.

According to Kremlin reports, Vladimir Putin has signed a visa agreement with the United States which will see liberalisation enter into effect in September.  The President has also ratified a new agreement with Washington that tightens rules for U.S. citizens adopting Russian children.  Mobile TeleSystems has criticised Apple’s ‘dictatorship mode’ when it comes to iPhone pricing and sales regulations in Russia.  More trouble for BP, as its oligarch partners in TNK-BP, the AAR consortium, have reportedly blocked a $1 billion dividend from the joint venture.