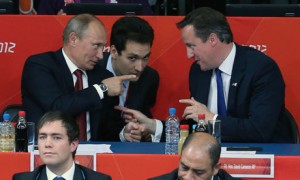 On a visit to London, President Vladimir Putin has told British reporters that he believes feminist trio Pussy Riot should not be punished ‘too strictly’.  The trial against the Kremlin-critical punks was interrupted on its fourth day by a bomb hoax.  Musicians Pete Townshend, Jarvis Cocker and Neil Tennant have expressed their concerns about the girls’ treatment in a letter in the Times.  A number of foreign clerics, interviewed by RFE/RL, have voiced similar worries.  Putin’s talks with British Prime Minister David Cameron apparently ‘highlighted divisions’ on Syria rather than heralding progress.  The Guardian concurs: ‘Nothing appears to have changed since Cameron and Putin last met in Mexico in June’.  Putin has expressed regret over Kofi Annan’s decision to resign as the UN special envoy to Syria.

With inflation reaching its highest rate so far this year in July, the IMF has warned that Russia needs to adopt tougher policies to protect the economy from overheating.   According a new Levada poll, Russians are broadly in favour of the spate of laws recently passed seen to constitute a crackdown on freedoms of speech and assembly.  Russia’s largest social network, VKontatke, has garnered criticism from the gay community after it refused to allow users to state in their profile that they are in a same-sex relationship.