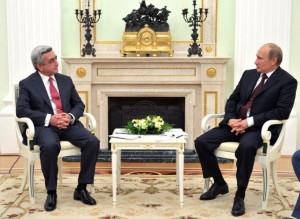 ‘We are freer than those who are prosecuting us […] We can say everything we want, and they have their mouths shut, and are puppets,’ the words of Pussy Riot member Nadezhda Tolokonnikova, in a final statement to the court.  Fellow member Maria Alyokhina argued, ‘No one will take my inner freedom away’.  The verdict on the trio, on trial for their anti-Putin ‘punk prayer’ will apparently be handed down on August 17.  Russia’s former UN envoy and current Deputy Prime Minister Dmitry Rogozin has called Madonna a ‘whore‘ after she voiced support for the girls.  The Moscow Times reports that opposition activists plan to rally outside the Investigative Committee today and will continue to do so on a weekly basis until those arrested on the May 6 March of Million are freed.  In Vologda, the Prosecutor’s Office apparently hopes to charge anti-corruption blogger Alexei Navanly with extremismover flyers criticising United Russia.  The lead investigator into the tax evasion case against Hermitage Capital CEO Bill Browder and the firm”s deceased lawyer Sergei Magnitsky has been sacked.

On the fourth anniversary of the five-day war with Georgia (for which Russia apparently had a contingency plan) President Putin and Prime Minister Medvedev have apparently offered conflicting accounts of how events unfolded.  Former generals in the army have decried Medvedev’s ‘indecision’ in his then role as President, which they say resulted in unnecessary fatalities.  The current Prime Minister has rebuffed the criticisms.

Following talks with President Putin, Armenian President Serzh Sarkisian says Moscow and Yerevan have ‘reached an understanding’ on the price of Russian natural gas.   In Kazan, an Islamist sect of around 70 members has been discovered, some of whose members have reportedly lived underground, without daylight for nearly a decade.

PHOTO: President Putin meeting with Armenian President Sargsyan in the Kremlin on Wednesday, August 9, 2012. He told reporters after the meeting that he had called then-President Medvedev twice on the Aug. 7 and 8, 2008, to discuss the situation with Georgia. (Kremlin.ru)