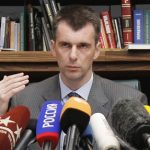 This weekend the Internet was awash with the video of Independent owner Alexander Lebedev livening up a pre-recorded TV debate by thumping verbal aggressor and property developer Sergei Polonsky, who once gained ignoble notoriety for branding anyone with less than $1 billion a ‘loser’.   As the bespectacled Lebedev leaped to his feet to smack his fellow guest, tearing through doubtless designer jeans, it seemed that the KGB agent still lurking deep inside that well-groomed corporate body had momentarily been released.  Indeed, Lebedev’s following comments, which spoke of ‘neutralizing the threat’, seemed designed to evoke the dark days of his judo-chopping tenure as a KGB lieutenant colonel.

Meanwhile the other story involving a beleaguered tycoon continues to develop, though the beating of Mikhail Prokhorov, remains, at this stage, only figurative.  Having apparently overstepped the boundaries of his very much Kremlin-encircled ‘opposition party’ and been ousted as leader of Right Cause, Russia’s third richest man unleashed some searing criticism of ‘puppetmaster’ Vladislav Surkov.  It wouldn’t be long however, before Surkov would regain control of the strings.  Today’s Telegraph reports on how a conciliatory Prokhorov is now taking pains to avoid any more punches from his ‘allies’ in the Kremlin:

In his first interview with a British newspaper since his outspoken comments last week, Mikhail Prokhorov, Russia’s third richest man, said he was confident that he would not repeat the fate of the last oligarch to defy the Kremlin, Mikhail Khodorkovsky, and be jailed.

“I am not afraid and see no threat,” the maverick oligarch told The Daily Telegraph, adding that he had allies in Russia’s political elite and that a battle was raging behind the Kremlin’s terracotta walls for the country’s future. “There is a conflict of different ideologies. There are the conservatives who don’t want to change anything and there are others who understand that urgent changes are needed. They are my allies.”

Sat in his command centre-style office in Moscow, Mr Prokhorov was noticeably at pains not to criticise Vladimir Putin, the prime minister, or President Dmitry Medvedev by name. But he did make it clear he thought it was time for some new faces at the top. “There has been a definite lack of new politicians in the world in the last 20 years and Russia is no exception.”

When asked whether he wanted to become president he said he had not thought about it and suggested it was better to ask “other people” what kind of president he would make.

Worried perhaps that he has gone too far in his conflict with the Kremlin, he insisted his decision to leave his party because of Kremlin infiltrators was “nothing personal”.