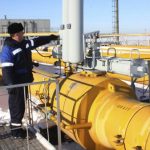 Four rallies – both pro- and anti-Putin – are expected to hit Moscow streets tomorrow, amid predicted temperatures of minus 16 degrees Celsius.  Many activists say they have already been pressured by police ahead of the marches, with one saying that his parents had been summoned by police for questioning.  Yelena Bogush wants to make sure that the wave of political unrest does not overshadow the sinking of the Kolskaya offshore oil-drilling platform last month, in which 53 people disappeared.  Vladimir Putin’s presidential campaign says it will work with election observers from the League of Voters.  The five presidential candidates are to be given equal amounts of free airtime on state television when campaigning officially begins tomorrow (Putin had almost three times the coverage of the other candidates last month).  Campaign representatives are to stand-in for Putin in televised pre-election debates – Putin apparently cannot attend in person because it would ‘impede his ability to duly carry out his duties’.  This BBC profile of opposition figures includes Alexei Yakimov, a protest organiser who turned political after being left for dead by police two years ago.  Has the ‘Putin-Medvedev divorce’ been sealed?

The U.N. has made concessions over the wording of its latest security council resolution in a bid to win Russia’s approval, replacing the explicit demand that Assad step down with a call for the Arab League to ‘facilitate a Syrian-led political transition’.  The Foreign Ministry has slammed EU chief Catherine Ashton for her comment that Grigory Yavlinsky should be allowed to run for president next month, telling her not to ‘lecture’ the authorities and accusing her of trying to ‘cast doubt on the elections before the event’.  Vladimir Putin has stated unequivocally that NATO’s missile shield is ‘undoubtedly aimed at neutralising the nuclear rocket capability of Russia’.  Opposition figure Mikhail Kasyanov says he is unhappy with the final cut of a pro-Putin documentary aired on state-run Channel One yesterday: ‘It’s not the film I agreed to be in’.

The private emails of Federal Youth Agency chief Vasily Yakemenko have been leaked (summarised in Russian here), apparently revealing ‘laving spending on youth initiatives’.  Deputy Prime Minister Dmitry Rogozin is annoyed by toys for children that are made in the West, and called for ‘toy models of Russian weapons and military equipment’.  A VTsIOM poll indicates that Mikhail Gorbachev and Boris Yeltsin are the most unpopular Russian leaders of the past century.