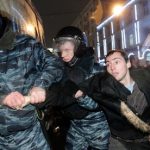 Between 3000 and 5000 people took to the streets yesterday in Moscow in protest against the results of Sunday’s elections, in one of the biggest opposition demonstrations in years.  The rally reportedly ended with violent confrontations with police.  Around 3oo people were detained, most of whom remain in custody.  Anti-corruption blogger Alexei Navalny and opposition activist Ilya Yashin, among the arrested, were delivered to court this morning.  Amnesty International has called on the Russian authorities on to release the detained protestors, calling them ‘prisoners of conscience.’  Footage from the rally can be seen on RFE/RL.  In terms of an international response to the allegations of fraud, the US secretary of state, Hillary Clinton has spoken of Washington’s ‘serious concerns’ about the conduct of the elections.   The OSCE has noted ‘several serious indications of ballot box stuffing’, says Bloomberg.  The Washington Post also notes complaints from international monitors who criticized what they called partiality by the election commission.  Human Rights Watch has released a statement calling for an end to the harassment of watchdog Golos.  A Communist party member working at a polling station has described ‘unprecedented violations’ to Reuters.

TV presenter Vladimir Pozner gives his view on why voters have taken against the ruling party (a main source of concern being the presidential switch) in an interview here.   How will Putin react to this unprecedented display of popular disapprobation?  He is still likely to win the presidential election, says RFE/RL, but has to reevaluate his game plan.  ‘No longer is Putin capable of winning in the presidential election just by saying general words about justice and reminding people of his achievements when he was president. He should explain why exactly he is coming back to office and what his plans are.’   ‘His “look-at-me” style appeared when the economy was on the rise but a combination of inflation and stagnant living standards is prompting many Russian voters once again to signal their unhappiness with the status quo’.  Directing the blame onto Medvedev is one option, say certain analysts.  Some wonder if the President’s planned switch to position of PM may be in jeopardy.  A Moscow Times editorial considers five other candidates for the role of Premier.  Emigration is proving a more and more attractive option for disgruntled Russians, says the Moscow Times.

Russia will reportedly downgrade relations with Qatar and withdraw its ambassador after he was beaten by customs officials at Doha’s airport last month, causing possible difficulty over a major energy deal between the two countries.  NATO Secretary General Anders Fogh Rasmussen urges Russia to cooperate with NATO in missile defense in an editorial in the New York Times.

PHOTO: Russian riot police detain a protester in Moscow as crowds opposed to Vladimir Putin take to the streets and post-election violence breaks out, December 6, 2011.  (Reuters)