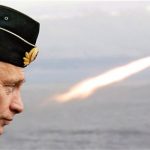 ‘Brezhnev wasn’t a minus for the history of our country, he was a huge plus‘: as unflattering comparisons with the late Soviet leader abound, Putin’s spokesman Dmitry Peskov has, in a interview with independent TV station Dozhd, praised the man who many blamed for an era of gerontocratic stagnation.  He also admitted that Putin’s famous amphora find on a deep sea dive was a publicity stunt.  ‘His motive is clearly to iron out imbalances of [Putin’s] image before the prime minister is elected to the highest office’, says Tatyana Stanovaya, quoted by the Moscow Times.   ‘Still,’ says Ellen Barry, ‘it was remarkable to see Mr. Putin’s press secretary, Dmitri S. Peskov, surrounded by a panel of exceedingly skeptical journalists, trying to explain as delicately as possible that Mr. Putin’s much-hyped dive in August had been staged’.  Finding a new image for the recently demoted Medvedev could prove much harder, says this op-ed.  Russia’s Right Cause party has pledged it will return almost $21 million of donations made to support its former leader Mikhail Prokhorov.  Garry Kasparov and other opposition leaders have launched a call for mass protest and ‘civil disobedience’ in the face of what they believe to be the ‘illegitimate’ December 4 elections.   Representatives of the Russian opposition have signed a declaration pledging to boycott the elections.  In a rare move, Moscow authorities have given permission for an opposition Day of Wrath rally, nine of which have been banned in the past two years, to be held next week.

Less than a week before Putin’s official visit to China, the FSB has revealed that in October of last year a Chinese national was arrested on suspicion of espionage, specifically seeking information on the S-300 anti-aircraft missile system.   It remains unclear as to why the FSB only disclosed the arrest now.  China has yet to comment.  U.S. Secretary of State Hillary Rodham Clinton has redoubled criticism of Russia and China for their veto on the UN Syria resolution: ‘Those nations are standing on the wrong side of history’.  French Foreign Minister Alain Juppe has also been vocal in his disapprobation.  Moscow’s Permanent Representative to the United Nations Vitaly Churkin defended the move on the basis the the resolution was ‘built on the confrontation philosophy’ and was an attempt to achieve the overthrow of an ‘undesirable regime’.  The fact that Russian arm sales to the Al-Assad government continue says more about the Kremlin’s motives, the BBC argues.  The Moscow Times suggests that Russia’s ‘seemingly hardening stance on UN resolutions targeting its allies […]  mainly signaled a return to a well-established Kremlin line.’   Russia has warned that it may cease cooperation with the United States on the missile shield in Europe, as, the Kremlin claims, Washington has been making decisions unilaterally.  ‘[P]umping that much money into rearmament and modernization is unacceptable in a country with a crumbling infrastructure and badly underdeveloped education and health care systems’: Ruslan Pukhov takes issue with defense spending.

As talk of a Eurasian Union mounts, the CIS countries have stated they are apparently ready to create their own court of human rights.   Belarus’ parliament has outlawed ‘silent’ protests.  An investigator in the case of Hermitage lawyer Sergei Magnitsky has been arrested for demanding a $3 million bribe to drop charges in an unrelated customs fraud case.  The Penitentiary Service has told Mikhail Khodorkovsky that any interviews with journalists will count as part of the total number of visits he receives, including those from close family members.