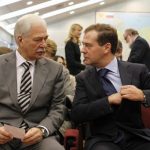 In what the Washington Post described as a ‘remarkable […] display of bravado’, Prime Minister Vladimir Putin went on prime time television yesterday to promise that his next presidential term would bring long-term stability to the country, and admitted that he and Dmitry Medvedev decided on the current course of re-election action four years ago.  All the same, he wants Russians to believe that they have the power to vote him out of office in next year’s presidential elections.  Communist Party leader Gennady Zyuganov discusses Russia’s inability to create a democratic party system.  Activist group The People’s Share hoisted a pirate flag over the Aurora cruiser in St Petersburg on the weekend to raise awareness about Russia’s 16.1% poverty rate (click for video of the protesters).  RFE/RL wonders ‘on what terms South Ossetia can preserve its quasi-independent status’, after a member of the would-be opposition candidate’s party was shot dead.

Anti-corruption blogger Alexei Navalny has been ordered to pay a fine of $3,200 after being convicted of slander and forced to withdraw claims that Vladlen Stepanov was in receipt of fraudulent tax returns linked with the work of Sergei Magnitsky.  Left front leader Sergei Udaltsov, who is on hunger strike, will be hospitalised after being refused treatment yesterday on grounds that his condition was ‘not critical enough’.  The Sunday Times will pay damages and legal costs to Yelena Baturina after she took it to court in London for falsely claiming that she had bought a £50 million mansion in Highgate.  Chairman of the Moscow-based Institute for Demography, Migration and Regional Development, Yuri Krupnov, speaks to the Financial Times about declining population.

‘Military chiefs continue to insist that Russia should have a million-man army. But under current circumstances, that is a physical impossibility.’  Russia insists that the ‘humanitarian base’ it is setting up in Serbia is not, in fact, a military base, or a base from which to spy on Romania.  Mikhail Gorbachev writes in the Moscow Times about nuclear disarmament.  Miriam Elder writes about snow, changing clocks, and food poisoning.