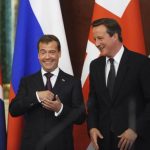 British Prime Minister David Cameron denies putting business before human rights during his visit in Moscow which saw $340 million worth of signed business deals despite the two sides being unable to agree on the Alexander Litvinenko case (with President Dmitry Medvedev saying that the extradition of suspect Andrei Lugovoi would ‘never happen’, citing Article 65 of the Russian constitution).  The issue ‘is not being parked,’ he said. ‘The two governments don’t agree.’  Prime Minister Vladimir Putin will interpret Cameron’s approach as a ‘no-trousers admission of political and economic weakness’, warns Simon Tisdall, as Luke Harding remembers strong past ties between Vladimir Putin and Tony Blair.  The visit produced ‘no big breakthroughs’, says Reuters, despite warm exchanges and apparent camaraderie (click for video extracts of Cameron’s address).  Despite the general media portrayal of the visit as imbalanced in terms of power (with Cameron as the underdog), the UK Prime Minister rejected Russia’s call for the resumption of relations with its security services, and met with a group of Russian rights activists to discuss the Sergei Magnitsky case, Mikhail Khodorkovsky, and the upcoming Duma elections.  Amnesty International has used the visit to highlight its ‘grave concerns about human rights abuses in Russia’.

Russia is resisting new attempts from western nations to increase pressure on the Syrian regime, saying that existing UN and EU sanctions will suffice.  UN Ambassador Vitaly Churkin says that Moscow will back Palestine’s bid to secure statehood.  Alexander Galimov, the only hockey player to have survived the Yak-42 plane crash, has died in hospital, bringing the death toll to 44.  The International Air Transport Association estimates that the Russia/CIS air crash rate is now three times the world average, says VOA.  Prime Minister Putin is overseeing plans to make the aviation sector safer, but these will not include a ban on Yak-42 planes, with the Sports Minister blaming not the model, but its operation.

Preservationists say that the authorised demolition of a century-old Moscow mosque, which happened to take place on the 10th anniversary of 9/11, was ‘an act of unbelievable barbarity’.  It doesn’t matter who ends up running for President, says Vladimir Ryzhkov, the outcome will be the same: ‘Ahead lies the clear prospect of the authoritarian regime and the monopoly on power held by Putin and his inner circle, United Russia and the siloviki.’