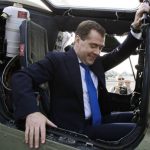 French President Nicolas Sarkozy spoke out against Russia during a speech in Tbilisi on Friday about the Georgian war, and WTO talks between Russia and Georgia have collapsed without agreement, with the latter vowing to block the former’s membership bid until relations improve.  Either way, Vladimir Putin will manage to use the issue for his own purposes, says the Washington Post.  Putin travels to China tomorrow, amid speculation that the trip will lead to stronger strategic partnerships.  Putin denies that he is planning to rebuild the USSR after he becomes president next year  – but there are compelling parallels, for example in Russia’s efforts to extend internal markets, says this piece.  The Prime Minister has been trending on Twitter following his 59th birthday on Friday.  The Internet is changing the information matrix in Russia, says RFE/RL, into ‘a more pluralistic affair where regular Russians are no longer expected to be passive consumers of traditional news.’

President Dmitry Medvedev has been attempting to check the ego of the United Russia party, warning them not to assume that they will win the December elections, although the party seems assured of victory, whether through higher approval ratings or the less official routes.  Medvedev has also made his most emphatic statement against Syria to date, urging Bashar al-Assad to reform of leave office, although Russia continues to block sanctions against the regime, much to the chagrin of the U.S.  Last week’s entry ban and deportation of a prominent German analyst was apparently a mistake.  Patriarch Kirill, the head of the Orthodox church in Russia, has commenced with his church reform, founding eight new provinces and working on plans for 13 more.  The New York Times profiles the political aspirations of Yegor Bychkov, a former convict and associate of Mikhail Prokhorov.

Guardian reporter Luke Harding has written a book about his various battles with the Russian state, as this reviewer recounts the ‘maddening interventions’ that foreign journalists in Russia often find themselves subjected to.  New charges have been filed against the suspects in the Anna Politkovskaya murder case.  RFE/RL remembers Yury Shchekochikhin.

$620 million has been earmarked for an environmental clean-up program to remove toxic waste from nature reserves.  A profile of Volgograd.  Rinat Voligamsi’s paintings of military life in Russian winter are showing in London.  Yetis, apparently.

PHOTO: Russia’s President Dmitry Medvedev gets off from a military helicopter during his visit to an Air Force base in the town of Korenovsk, in southern Russian Krasnodar region, October 8, 2011. REUTERS/Dmitry Astakhov/RIA Novosti/Kremlin