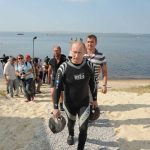 Amnesty International says that the arrest and 2-week imprisonment of Left Front leader Sergei Udaltsov for participating in a rally makes him a ‘prisoner of conscience’, and says it has grounds to believe that his incarceration is politically motivated.  As part of a boost for archaeological restoration, Vladimir Putin has been scuba diving at Russia’s Atlantis.  The L.A. Times reports on activities at pro-Kremlin youth camp, Seliger, as one attendee says that he hopes that ‘being maximally active here will help me to climb up the social ladder and reach my goals faster.’  Reporting on the trial of Yulia Tymoshenko, the New York Times suggests that ‘[a]ny isolation of Ukraine could push it away from the EU back toward Russia’.  Dmitry Medvedev will meet with Ukrainian President Viktor Yanukovych in Sochi this week, and, sources say, could include Tymoshenko on his agenda.

What happened to ‘managed pluralism’, asks Brian Whitmore, in response to the news that the Right Cause Party’s election propaganda was removed by officials across Russia. Reuters speculates that the U.S.-Russia reset is under threat, as the former says that it has not been formally notified about Russia’s retaliatory blacklist of its officials.  The Other Russia reports that a slander suit by an investigator, who was trying to defend himself from allegations made by rights activists, was thrown out earlier this week.  ‘Why does the creation of joint missile defense play such a big role in NATO-Russia relations?’  The president of a Moscow medical school has lost his job and could be charged over the enrolling of hundreds of ‘ghost applicants’ for scholarships, thought to have been cover-ups for wealthy students who were planning to pay bribes for places.

RFE/RL wonders whether there will be another Russia-Georgia war.  About 100 of Russia’s An-12 cargo planes were grounded yesterday following the crash earlier this week that killed all 11 of its passengers.  According to Boris Berezovsky, his 87-year-old mother regularly advises him to ‘make peace with Vova [Putin].’