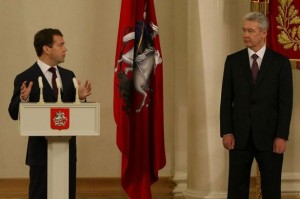 ‘Why do you tweet while Khodorkovsky rots in jail?’  A group of Moscow State University students who attempted to pose challenging questions to President Medvedev upon his arrival at the college campus have been detained by police.  The President, who made his facebook debut yesterday, used his speech to students to express his interest in social media, apparently stating that he would be willing to hold a master class on Twitter in South Ossetia.  The President also took the opportunity to reaffirm a need for national unity, arguing that those who object to support of the Caucasus are simply ‘not very smart […] or provocateurs’.  Former Moscow mayor Yuri Luzhkov has laid into the current President, arguing that he would be a very weak prime minister should he swap jobs with Prime Minister Putin next year.  The two U.S. PETA activists who attempted a protest against the fur trade in Moscow may face trial.   Whilst their street protest was thwarted by police intervention, the Moscow Times reports that the pair did make their point on Dozhd television.

Shaun Walker reports on how the anti-Putin movement is finding new means of expression in song.   The Washington Post considers how the critical tone of a new biography of the Prime Minister “The Man Without a Face: The Unlikely Rise of Vladimir Putin” could put its author, Masha Gessen, at risk.  In a new report, Reporters Without Borders has criticized the lack of free press in the Russian Caucasus republics and described the conditions in which the press works as warlike.  A Moscow jury has judged a man guilty of the premeditated murder of a Slavic soccer fan during a fight last year, which prompted a wave of nationalist rioting.  Russian human rights activists have proposed adopting an election code in order to increase the transparency of the voting process.   One of the organizer’s of Moscow’s latest Day of wrath protests, Sergei Udaltsov, who went on hunger strike after being sentenced to 10 days’ administrative detention, has been released early due to health problems.  Russian blogger Eduard Bagirov, who fled house arrest in Moldova following his detention on suspicion of involvement in mass riots, has vowed to sue Moldova’s prosecutor general and acting president.

Upon hearing the news of the death of Colonel Gadaffi, the Russian parliament has refused to adopt a statement on Libya and express condolences.  President Medvedev has expressed hope for peace and a democratic government in the frail state.  The President’s special envoy has been less hopeful, warning of the possibility of persistent conflict in Libya despite the fall of the leader.  In an interview with the BBC, US Senator John McCain suggests that the leaders of Russia and other authoritarian states should view the Arab spring as a cautionary tale.  Moscow has little cause to be pleased about the dictator’s dramatic end, says this analysis.

According to the Russian dailies Rossiiskaya gazeta and Izvestiya, the Russian Defense Ministry is planning the speedy training of a large number of snipers: RFE/RL wonders why.  The number of Russian air traffic incidents, including crashes and technical problems, has doubled year-on-year to 16.