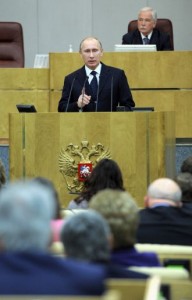 During a rare visit to the State Duma, Vladimir Putin was greeted with the refusal of two opposition parties to stand when he entered, in evidence, this article says, that the opposition is hardening in the run-up to the election.  The BBC examines the same trend in relation to the cold shoulder Putin received at Sunday’s boxing match.  The Prime Minister has retorted with an appeal to the opposition to ‘behave calmly’, commenting, ‘The opposition is only there to make sure that the ruling party can grip tighter the steering wheel of governance and show society the rightness of its chosen paths along which the country is developing’.  He also emphasized the importance of prioritizing stability and prosperity over partisan interests.  An op-ed from the Moscow Times explains why boycotting the elections has become a favored method of protesting.  Evidence that the falsifying of results might already be underway can be found here.  Reuters considers the (rising?) fortunes of the Communist parry, led by stalwart Gennady Zyuganov.

Click here to read the first interview with a Western newspaper by Natalia Magnitskaya, the mother of Sergei Magnitsky, who has fearlessly campaigned for justice for her corruption-fighting son who died in pre-trial detention in 2009.  Kathy Lally reports on how, despite Medvedev’s promise to improve pre-trial conditions for alleged white-collar criminals, conditions remain deplorable.  Platon Lebedev, the business partner of Yukos founder Mikhail Khodorkovsky has challenged, in the Constitutional Court, a law that requires convicts to plead guilty to qualify for parole.  The United States has reportedly voiced concerns about a new bill by St. Petersburg’s city legislature that would introduce fines for the promotion of homosexuality.   According the Moscow Times, a group of United Russia deputies have claimed that there is support for a national ban on ‘homosexual propaganda’.

In a major escalation of Russian opposition to the US’ proposed missile defense plans, President Medvedev has said on state television that he has ordered the military to prepare the capability to ‘destroy’ the command structure of the planned system in Europe.  He included the possibility of stationing Iskander rockets in the Kaliningrad enclave between NATO members Poland and Lithuania.  He even added that Russia would consider backing out of the START treaty should US missile defense plans go ahead unchecked.  The White House has apparently responded with a firm rejection of the idea of scrapping the system.  NATO Secretary General Anders Fogh Rasmussen has called the Russia threats of retaliation ‘very disappointing’.  Mikhail Margelov, the head of Russia’s Council’s International Affairs Committee, has however assured Itar-Tass that the disagreement on ABM will not derail the reset.

Russian hackers have apparently orchestrated a cyber-attack on a water plant control system in Illinois.  In a move likely to irk the Kremlin, Georgian president Mikhail Saakashvili has unveiled a monument to Ronald Reagan in Tbilisi, praising the 40th U.S. president for ‘destroying the Soviet Empire’.  Despite claims to the contrary by Russian authorities, Russian pilot Vladimir Sadovnichy, who was freed from a Tajik prison after two weeks of diplomatic wrangling, has denied that there was a political motive to his arrest.

Russia has, finally, made contact with its wayward Mars probe.