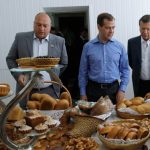 The captain of a ship that failed to come to the aid of the sinking Bulgaria says that technical reasons and bad weather prevented him from providing aid.  The Polish government’s official report on the Smolensk plane crash will not blame Russia.  Journalists in Nizhny Novgorod claim that they were assaulted by military personnel during filming of a fire at a military base.  Former Yukos associate Platon Lebedev has been given a ‘negative assessment’ by the labor camp from which he is seeking release on parole.  The U.S. has revealed that it perceives Russian and Eurasian organized crime networks as a significant threat to its economic growth.  Its State Department, meanwhile, has put officials linked to the death of Sergei Magnitsky on a visa blacklist, despite Russia’s warnings that it would ‘respond asymmetrically’ to such measures.  Top police officers are very publicly losing their jobs – but then less publicly appearing in other roles, notes the Moscow Times, offering the examples of Arkady Yedelev and Nikolai Ovchinnikov.

The sacking of Nikolai Troitsky for writing homophobic blog entries is fueling the debate over gay pride marches, says Shaun Walker.  ‘Arab countries should learn from Russia’s transition’ from Soviet rule 20 years ago, says this New York Times piece.  The Ministry of Regional Affairs is reportedly planning to boost its spending in the North Caucasus to $10 billion a year in a bid to end terror and improve development, as militant Doku Umarov promises a newly strengthened insurgency.  The Investigative Committee and the Prosecutor General’s Office have taken up arms again over a child sex abuse case in the Amur region.  A recent brawl in Sverdlovsk apparently involved low-ranking police officers and a member of United Russia.  Alexander Golts is unimpressed by Valery Ivanov’s ‘optimistic’ statements about Russian aerospace.

Former Moscow Mayor Yury Luzhkov has won a defamation lawsuit and damages of $715 from tabloids Lifenews.ru and Tvoi Den for reporting that he has real estate in the breakaway Georgian region of Abkhazia.  More attempted pilot laser-blinding at Domodedovo.  A number of regions are on wildfire alert.  Reuters has a series of images documenting life in a Siberian prison.

Alexei Pankin pays tribute to Dmitry Furman, the political scientist who died last week.  Soviet-era performer Vladimir Vysotsky, who died 31 years ago, is still commemorated every year on the anniversary of his death, RFE/RL reports.