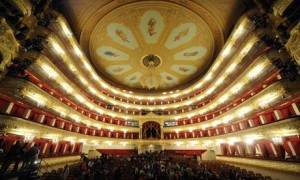 The New York Times describes the way in which Moscow’s former mayor Yuri Luzhkov has continued his onslaught against Dmitry Medvedev and the Kremlin, giving ‘interviews to no less than six Russian-language media outlets, firing off critiques that have ricocheted through the blogosphere’.  Along with his wife, Yelena Baturina, the United Russia founding member has threatened the Kremlin with lawsuits and denounced President Dmitry Medvedev as ‘a battering ram for racketeers’.   Under investigation for alleged theft in relation to the Bank of Moscow, the pair has apparently spurned their interrogation sessions at the Investigative Committee.  A spokeswoman for the Kremlin has dismissed the former mayor’s claims that he is a victim of political persecution as ‘laughable’, adding that ‘a retired politician does not deserve the honor’.  Reuters’ Jeffrey Taylor sees the presidential switcheroo as a nail in the coffin of Medvedev’s credibility.   Valentina Matviyenko, former St Petersburg governor, now speaker of the Federation Council, has said that there exist ‘very serious’ problems within the election system, but reform must be deferred until after the forthcoming elections.  One time world tennis number one Marat Safin is among a number of Russian sports stars to try their hand at entering the Duma.   (At least he knows a racket when he sees one.) The former cellmate of jailed Yukos founder Mikhail Khodorkovsky is basing his claims for political asylum in Britain on the fact that prison officials apparently forced him to attack the tycoon and launch a sexual harassment suit against him.  A second former police officer has been charged with organizing the murder of journalist Anna Politkovskaya.  Investigators have looked into accusations of extremism against detective fiction writer Boris Akunin at the behest of a jailed murderer, but have not found grounds for instituting a criminal case.  ‘Some bloggers interpreted the incident as the start of a crackdown on artists and intellectuals’ says the Moscow Times, but the writer has suggested rather that an upcoming ultranationalist rally is heightening authorities’ sensitivity towards extremism.  In a rare sign of progress for a missile program riddled with mishaps, Russia has successfully test-fired a large long-range missile.  New statistics from the State Department reveal that whilst the US has somewhat reduced its numbers of strategic intercontinental missiles, bombers and nuclear warheads, it continues to maintain a major advantage over Russia.

Marking the culmination of a six-year $700-million restoration dogged by scandal, Russia’s Bolshoi Theater will re-open with star-studded gala performance tonight.  The restoration of the cultural landmark, which involved a major overhaul of the theater’s acoustics damaged by Soviet-era despoiling, has not proved to everyone’s tastes.  One of the Bolshoi’s top dancers, Nikolai Tsiskaridze, has described it as a ‘vandalism of a historical monument’, arguing, ‘you have the feeling that you are in a hotel in Turkey that has been built in the shape of the Bolshoi Theater’.  The Telegraph picks up on the theme, with a list of Russia’s five most controversial restoration projects in modern history.