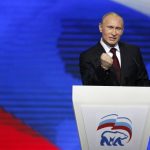 TODAY: Putin addresses United Russia congress with anti-Western rhetoric; party’s dwindling support scrutinized; Medvedev fades into background; Kasparov accuses ‘fake’ opposition.  Hermitage releases its own Magnitsky report; protestors for Tajik workers’ rights arrested at protest; military to reduce conscription; Russia hesitant on Syria; Medvedev vows punishment for space program error-makersPrime Minister Putin accepted the United Russia Party nomination as its candidate in next year’s election in front of 11,000 people at the party’s convention, which the Moscow Times has described as ‘largely a Putin lovefest’.  The Independent recounts how a ‘crude nationalism coursed through Mr Putin’s speech to the assembled faithful’.  Bloomberg considers why nationalism has played such a strong role in the election.  To see video footage of the congress, check the BBC.  Putin also took the opportunity to criticize meddling powers, insisting ‘all our foreign partners need to understand this: Russia is a democratic country […] on which they cannot impose anything from the outside.’   The soon-to-be-President went so far as to accuse foreign powers of hiring mercenaries to undermine the ruling party through work with NGOs and civil society groups.  For all of the adulation on display yesterday, United Russia’s popularity is in jeopardy, says a leading pollster, which has predicted that the party will win about 252-253 places in the 450-seat lower house of parliament, down from the 315 it has now.  One analyst quoted by the New York Times suggests United Russia fatigue ‘is reminiscent of the late years of Lady Thatcher or Helmut Kohl’; the signs of a brand getting old.  Ellen Barry notes that even in smaller industrial towns, traditional Putin strongholds, the party is losing its luster.  Moscow Mayor Sergei Sobyanin has audaciously vowed that United Russia will get 50% of the vote in Moscow in the elections, despite the fact that polls show the ruling party has less than 30% support in the capital.

In a reflection of his arguably increasing irrelevance, Medvedev’s speech at the congress was apparently interrupted by cries of ‘Putin‘.  Video footage of the current President dancing awkwardly with a child ballerina will do little to repair his reputation.   The head of the Moscow metro has ordered that opposition party Yabloko’s election posters be removed from stations.  During a debate with Yabloko bureau member Aleksei Melnikov on whether oppositionists should boycott or participate in the elections, Garry Kasaprov apparently accused the opposition party of colluding with the authorities in creating managed democracy.  ‘You can no longer pretend: it’s Putin’s lifetime dictatorship’, the chess master and opposition leader has said of the presidential election in an interview with the Telegraph.

Hermitage Capital investment fund has today released an in-depth report on the false arrest, torture and pre-trial death of its lawyer Sergei Magnitsky, who uncovered a major fraud operation.  ‘If the legal system here worked, a 75-page report titled “The Torture and Murder of Sergei Magnitsky and the Coverup by the Russian Government” would be submitted to a court of law. Instead, it is being delivered Monday to the court of international opinion’, says the Washington Post.  Moscow police have arrested five people who were part of a protest outside the Federal Migration Service against recent deportations of Tajik migrant laborers.  According to the Other Russia, the Culture Ministry is seeking to introduce censorship of films deemed to contain ‘extremist’ content.  Nikolai Alekseev suggests that St Petersburg’s new anti-gay bill may be an attempt ‘to increase the vote for the ailing ruling United Russia party […] but it also creates an atmosphere of hatred in society’.

President Medvedev has announced that the Russian military will dramatically decrease its number of conscripts and rely instead on volunteers.  The Foreign Ministry has expressed opposition to sanctions against Bashar Al-Assad’d government in favor of internal Syrian dialogue.  Russia will send a flotilla of warships led by its only aircraft carrier to its naval base in Syria for a port call next year, as tensions with the West over the crisis increase.  ‘I am not suggesting putting them up against the wall like under Josef Vissarionovich (Stalin), but seriously punish either financially or, if the fault is obvious, it could be a disciplinary or even criminal punishment’: Medvedev gets tough on Russia’s space cowboys.

PHOTO:  Putin gesturing at the United Russia convention on Sunday, Nov 27, 2011. The party nominated him to run for the Kremlin.  (Alexander Zemlianichenko / AP)