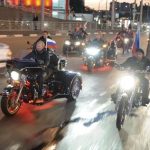 President Dmitry Medvedev has set December 4 as the date for State Duma elections, warning of ‘attempts to incite ethnic hatred’ that may arise during the campaign.  He also reportedly agreed with Right Cause leader Mikhail Prokhorov to limit the winning party’s Duma seats to 226.  Nikolai Petrov tries to untangle the political logic behind the replacement of St Petersburg Governor Valentina Matviyenko with ‘gray, low-profile presidential envoy’ Georgy Poltavchenko.  ‘Despite touting their primaries as an indication of honest competition, United Russia leaders said the list of candidates is yet to be determined,’ says RFE/RL.  New Wikileaks cables reveal official U.S. thoughts on the Russian Foreign Ministry (sexist) and the middle classes (not yet politically active).  The leaked U.S. Embassy conclusions on other matters, including fitness clubs, ‘read less like a John le Carré novel, and more like Reader’s Digest’.  The U.S. will not recognise the legitimacy of last week’s election in Abkhazia.  Vladimir Putin has been hanging out with the Night Wolves at a bike festival in Novorossiysk.  Russia’s next visit to the International Space Station will be postponed for at least a month to allow times for safety checks following last week’s cargo craft crash.  ‘We will do everything possible not to leave the station without a crew.’

The Natural Resources Minister has announced an $82 million targeted program to develop 12 nature reserves across the country.  Former Yukos CEO Mikhail Khodorkovsky has started a new job as a columnist for the New Times, drawing readers with ‘graphic stories’ about fellow inmates.  Yesterday’s bomb in a Moscow parking lot is thought to have been targeting the luxury car of a police officer, with anarchist youth groups thought to be responsible.  A victim of the Smolensk plane crash has been exhumed, apparently due to concerns that the Russian autopsy may have been faulty.

A history lesson from the New York Times: August 1991, the Soviet parliament suspends the activities of the Communist Party.  ‘Most Russians still have negative feelings about the liberal reforms of the 1990s.’  Mikhail Prokhorov says that Russia’s return to its Soviet past in the form of rulers ‘striving for personal gain […] will kill us all.’