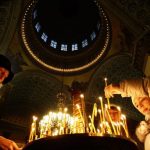 Former Finance Minister Alexei Kudrin is calling today for a rerun of the Dec 4 elections as a way of calming public outrage over the results and officially acknowledging flaws. ‘Without the acknowledgment that the parliamentary election was unfair, the fairness of the presidential vote will be thrown into doubt, irrespective of how honest it might be,’ he said.  Kudrin also commented on the current state of the opposition, estimating that it will take ‘one and a half or even two years at the earliest’ to prepare a presidential candidate popular enough to challenge Vladimir Putin.  The new opposition movement ‘For Honest Elections’ is planning a mass demonstration in Moscow on February 4.  Vladimir Churov, Russia’s top election official, has rejected protesters’ demands that he step down amid accusations of voting fraud, saying that he intends to serve all four remaining years of his term.  Churov believes that installing transparent ballot boxes in a third of Russia’s polling stations will reduce the practice of ballot-stuffing at the March elections.  He is currently trying to persuade the public that video footage of election fraud is fraudulent.  Sergei Udaltsov has suggested that activists set up coordination centers in order to improve dialogue with authorities.

The Washington Post compares political moods and government responses in Russia and Kazakhstan: ‘In Russia, one of the reasons for the unexpected protests was because the authorities were relaxed.’  Sergei Ivanov has replaced his predecessor Sergei Naryshkin as a senior member of the presidential council in charge of fighting corruption.  Brian Whitmore’s Power Vertical Podcast discusses the official response to the current protest movement.  An investigation has been launched into the death of one of Russia’s only 40 remaining Amur leopards.

Celebrations for Orthodox Christmas begin tonight.  Around 90,000 police will be deployed at churches around the country to ensure safety.  The Daily Beast discusses the activities of political art group Voina.