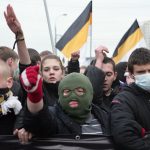 Friday’s Russia march, to celebrate ‘Unity Day’, apparently attracted thousands of protesters, among them ‘football fans, skinheads, national socialists’, to quote nationalist leader Dmitry Demushkin.  Chants of ‘Russia For Russians’ and ‘Migrants today, occupiers tomorrow’ were to be heard from the chorus of activists, says RFE/RL.  Reports on the precise number of attendees have varied wildly, with Moscow police attesting to a crowd of 7,000, but Ria-Novosti reporting the presence of 32,000.  Anti-corruption blogger Alexei Navalny, whose plans to attend raised some controversy, tried (to little avail, says the Moscow Times) to direct the vitriol of the crowd towards United Russia.  The BBC reports that Navalny apparently said the Russian March was a chance to ‘discuss problems which really exist in the society but which are taboo and are never discussed in the parliament, on television or anywhere else’.  RFE/RL has marked the marches with two in-depth pieces on the problems in the North Caucasus and why Russia refuses to relinquish the troubled-plagued region.  ‘Young Muscovites march around the city with cries of “f… the Caucasus! F…!” and the young mountain youths walk around the streets of Russian cities in a demonstrably defiant and aggressive fashion’: Andrei Piontkovsky on the Other Russia analyzes the nature of trenchant ethnic divisions.

The opposition Yabloko party has made a point of emphasizing the values of multiculturalism and inclusion on a trip by leader Sergei Mitrokhin to Kazan.  The party has published its election program in 15 languages spoken in the Russian Federation in what it says is a response to the November 4 marches.  Another United Russia official has been accused of ‘electoral blackmail’ after threatening cuts in funding for a local town unless its inhabitants vote for his party in the December elections.  Deutsche Welle examines the seemingly sizable potential of the Communist Party in the upcoming vote.  Russian police have impounded a truck full of Communist Party literature without explanation as electioneering begins.  The party’s chairman Gennady Zyuganov has attended the unveiling of a new monument to Vladimir Lenin in Ufa, the capital of the Russian republic of Bashkortostan.

Veteran rock band Mashina Vremeni whose lead singer has, in the past, been accused of pandering to the Kremlin was greeted with boos at a concert in the Siberian town of Kemerovo when the presenter announced that the show was sponsored by United Russia.  A 16-year-old nanny taken into custody with opposition leader Sergei Aksyonov’s six-year-old son following a Moscow rally has accused a policeman of threatening to rape her if she did not give false testimony against the leading Other Russia activist.  Ellen Barry presents an analysis of Vladislav Surkov which reveals that the top Kremlin strategist is a ‘creative, ironic type.’

The U.K. Crown Prosecution Service apparently wants to charge a second man, Dmitry Kovtun, a Russian businessman, with the murder of former KGB man Alexander Litvinenko, who was poisoned in London in 2006.  In an interview with the Sunday Times, Kovtun has strenuously denied any links with the case.