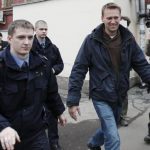 Beleaguered Prime Minister Vladimir Putin has accused US Secretary of State Hillary Clinton of fomenting the protest movement which has seen hundred take to the street in Moscow.  Last night St Petersburg also witnessed a protest of around 250 people, of whom 70 people were detained.  Meanwhile a planned protest in Moscow was blocked by a heavy police presence.  Law enforcement detained five people in Triumfalny Square for their attempts to hold an unauthorized meeting, which was apparently attended by more than 50 reporters and bloggers.  Opposition groups in Russia have vowed to continue holding unsanctioned demonstrations to protest the results of the parliamentary elections despite the detention of many of their number.  Ria-Novosti reports that around 20,000 people have apparently indicated on social network sites that they will attend a sanctioned protest on Saturday in central Moscow.  Opposition leader Boris Nemtsov has urged that the results of Sunday’s elections by nullified and said of protestors’ treatment at the hands of police: ‘People were arrested in a brutal fashion, were beaten, denied access to lawyers, and it was not always possible to even pass food and water to them’.  He is not alone in demanding a re-count; the last Soviet leader, Mikhail Gorbachev, has also told the media he believes the results should be declared null and void.

Reuters considers how social media have propelled the protest movement in Moscow.  According to RFE/RL, some 18,000 people have signed up on a Facebook page to attend planned mass nationwide demonstrations on December 10.  ‘This is just one more proof that the Internet is fully capable of changing the world by mobilizing thousands of people’ says a Moscow Times op-ed.  ‘You cannot fight YouTube; certainly not after the clips of election commission officials stuffing ballot boxes have gone viral’, adds the Guardian.  Meanwhile, one member of the press has spoken of a ‘total news blackout’ in official media.  Stanislav Kucher, a journalist from Kommersant has criticized journalists from the state-run media for their failure to cover the protests.  President Medvedev learns firsthand the perils of Twitter.

Grigory Melkonyants of harassed NGO Golos has penned an op-ed for the Guardian in which he pledges the organization will continue the fight against electoral fraud.  Opposition leaders apparently believe that election officials fabricated 20-25% of United Russia’s result.  ‘On voting day […] election workers quietly slipped ballots into the boxes, as many as 50 at a time, being careful to keep the papers from rustling and attracting the attention of observers’.  Former Moscow Mayor Yury Luzhkov said he did not vote for United Russia and allegedly indicated an interest in the stance of arrested anti-corruption blogger Alexei Navalny.  Andrew Kuchins from the Center for Strategic and International Studies has told the BBC that United Russia’s sagging popularity is, in part, due to the presidential switch.  Vladimir Putin has submitted documents to be officially registered as a candidate in the March 2012 presidential elections.  Bloomberg considers how the Prime Minister may seek to re-define himself in the face of popular unrest.  Undermining United Russia will be one way of doing it, the Washington Post suggests.

President Medvedev is in Prague to discuss missile defense plans and economic cooperation.  A military official has revealed that Russia is preparing to deploy S-400 surface-to-air missiles in Kaliningrad.  NATO Secretary-General Anders Fogh Rasmussen has said that Russian countermeasures to the alliance’s ballistic-missile-defense system would be a waste of money because they would be targeting an ‘artificial enemy.’