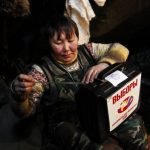 Early voting has begun in the Nenets region, where ballot boxes are transported around ‘nomad camps’.  Nashi has announced that 20,000 of its members will patrol Moscow on election day to keep opposition protests under control.  The For Honest Elections movement in Novosibirsk has applied for permission to hold a 12-hour-long rally the day after the presidential elections.  ‘[Investors] believe the protest movement is unlikely to survive beyond the election. There are too many different vectors pulling it in different directions and after the election the main focus will be gone.’  Opposition groups including the Left Front are calling on supporters to stage a flash mob at this Sunday’s Maslenitsa holiday festivities in downtown Moscow.  Campaign posters for presidential candidate Mikhail Prokhorov have been torn down in a number of cities.  Prokhorov says he wants to form his own independent political party.  A group of deputies who were refused registration for the Lermontov City Council elections in Stavropol have gone on hunger strike.

Russia’s arms deliveries to Syria have apparently increased, despite international criticism, as the Foreign Ministry says it supports the Red Cross’s call for a daily two-hour ceasefire.  The Moscow Times speaks to Sergei Mokhnatkin, who many consider a political prisoner, having been badly treated by prison guards in a bid to stop him from making complaints about goods stolen from the prison school where he worked.  The head of a drivers’ rights group could be imprisoned for posting messages on Twitter during a court hearing.  Novaya Gazeta shareholder Alexander Lebedev says that there are no funds available to pay the newspaper’s staff due to financial losses at the National Reserve Bank.  Some are drawing connections between the Central Bank’s investigation of the National Reserve Bank and the newspaper’s ‘relentless criticism of the Kremlin’.

An unsanctioned concert staged by all-female punk group Pussy Riot in Christ the Savior Cathedral in Moscow could lead to criminal charges, after the group stormed the stage and performed for less than five minutes.  The Caspian Sea, which has frozen for the first time in years, has stranded hundreds of endangered Dalmatian pelicans.  Dmitry Medvedev has praised ‘the values of Buddhism’.

PHOTO: A member of the local election commission secures a mobile ballot box in a traditional tent during early voting at a reindeer breeder’s settlement in the Tundra region 50 km from the north Russian town of Naryan-Mar February 21, 2012. REUTERS/Anton Golubev