No Vacation From Tense Russia-Georgia Relations 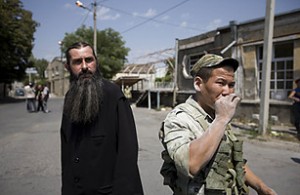 Since out-an-out conflict with Georgia ended after just five fulgurant days in 2008, Russia has maintained an aggressive stance towards the neighboring regime.  The boom of tanks and guns has however been replaced by a continual drone of barbed accusations emanating from the Kremlin.  Hayley Sweetland Edwards in the New York Times sees, nearly four years on, a certain flexibility on the part of Georgian President Mikhail Saakashvili, who has offered visa-free travel for Russian citizens.  As a result tourism has flourished.  The Kremlin however, refuses to bend:

But so far Moscow has not met Tbilisi halfway. It has not returned the offer of visa-free travel for Georgian citizens, nor has ilifted the so-called “wine embargo” of 2006, which cut off imports of Georgian wine, mineral water and other products on the grounds that they were of poor quality, delivering a major blow to Georgia’s export market.  Last month, the chief of Russia’s consumer protection agency expressed interest in resuming imports of Georgian mineral water, but then went on to accuse Tbilisi of “economic sabotage” and of deliberately exporting African swine fever to Russia.

To finally dampen any hopes of tourism proving a source of rapprochement, we can offer an addendum to this list, thanks to the Russian Foreign Ministry ‘s new warning against its citizens traveling to an ‘oppressive’ Georgia.