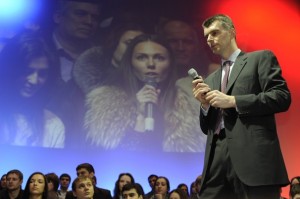 Pundits have been wondering for some time what Mikhail Prokhorov would do following his presidential bid.  Recent rumors about him considering running for Moscow mayor have been quashed.  It would seem creating a new political party, the ‘Civic Platform’ is the answer.  That is, if it can really be called a party.  The FT explains:

Mikhail Prokhorov, the billionaire owner of the New Jersey Nets basketball club as well as a good chunk of the Russian economy, has created a new political party, but refused to join it.

It is a characteristically inscrutable move by Prokhorov, whose political career is nothing if not an exercise in creativity. Last fall he established a political party which then summarily expelled him, following which he ran for President, declaring that with his $18bn fortune, he “represented the Russian middle class”. He came a surprising third in March.

Now comes a political party which, he says, is “not a political project” and thus is ideally suited to the “post-political-party age”. He has named it “Civic Platform”.

Channelling a combination of Thomas Friedman and Jean-François Lyotard in a packed Monday press conference, Prokhorov set out his vision: in today’s world “horizontal and network relationships” have already made “vertical authority” irrelevant. Traditional political parties are dead – “they just don’t know it.”

Thus, it stands to reason, there is no need for a political party, only “a community of people who share our values”, as he put it.
Notionally, designing a political party for the post-political-party age is an extremely tough ask, and it remains to be seen whether Mr Prokhorov’s optimism about the inevitable triumph of the “horizontal” over the “vertical” will be borne out, especially in Russia, where – lest anyone forget – the vertical is still going strong, twelve years into the Vladimir Putin era.