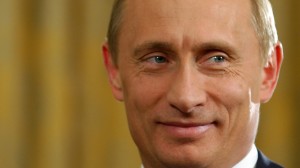 Weakened, conflicted, cautious: all adjectives used to describe Vladimir Putin on the eve his re-inauguration as President in this article from the Washington Post.  The Prime Minister has, analysts argue, almost insurmountable toils ahead of him if he wishes to compete with a newly distrustful electorate, the burgeoning opposition class, and perhaps most worryingly – a quaking power vertical:

“In Soviet times, they reported great harvests and cows heavy with milk,” he said, “but there was no butter in the shops. Now they say the vertical of power has brought the country up from its knees and we won’t let the Americans build their missile defense. But it means nothing, and everyone knows it.”

Now Putin must find a way to build a new system of governance, said James F. Collins, a former U.S. ambassador to Russia and director of the Carnegie Russia and Eurasia Program.

“I don’t think he can count on the vertical,” Collins said. “No one’s afraid of them anymore.”

Pastukhov and others foresee only difficult years ahead. When Putin decided to return to the presidency, brushing aside Dmitry Medvedev, who had cast himself as the liberal standard-bearer, he lost the opportunity to leave office peacefully, they say.