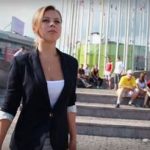 The veneration that Vladimir Putin inspires in certain sectors of Russian society has often emerged in baffling manifestations; see the Prime Minister as reincarnation of the apostle Paul for a recent example.  Today, Shaun Walker from the Independent reports on what could only described as a new low, a political movement which resembles something Hugh Hefner and Goebbels might have invented in hell.  Welcome to ‘Putin’s Army’:

Young women across Russia have been called on to show their support for Vladimir Putin in an unusual way: by ripping off their clothes. The unexpected campaign has been launched by a group calling itself the Putin Army, which posted a slick video online at the weekend featuring a trio of young women announcing a competition.

“I’m just crazy about a man who changed our country,” says a voiceover, as we see “Diana” walking through Moscow, while the camera frequently hovers over her sizeable bust. “He’s a great politician, and an amazing man. He’s Vladimir Putin,” she says, adding that despite the millions who admire him, there are some who “pour dirt on him, maybe because they are scared of him, or because they themselves are weak”.

Later in the video, Diana meets two nubile friends sunbathing by the riverbank, and they daub “I’ll tear [clothes off] for Putin” onto skimpy T-shirts in red paint. The video ends as they rip the T-shirts off. They ask other “young, smart and beautiful” girls to “tear off something for Putin” and post a video of it online. The best entrant will win an iPad. It is unclear who is behind the Putin Army, but the video is professionally produced, and bears the hallmarks of one of the pro-Kremlin youth organisations such as Nashi.