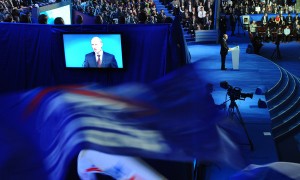 Whilst Vladimir Putin may have found himself 614 yes-men and women in the ruling party to vote unanimously for his candidacy over the weekend and 11,000 more warm bodies to fill yesterday’s congress, pollsters are suggesting that Putin should prepare himself for a possible glitch in the matrix. Last week Russia observers took the catcalls that greeted the Prime Minister at a boxing match as well as recent statistical evidence of declining popularity ratings as evidence of a new wave of opposition.  Headlines have tantalizingly spoken of the end of an era, the final chapter for United Russia and its leader.  It remains, however, far from evident that the dent to the Prime Minister’s confidence will herald the definitive end of Putinophilia, nor the consignment of United Russia to the dustbin of history just yet.  What it does suggest, as the New York Times point out below, is that voters, if not necessarily agitated, are certainly bored, and the insouciance with which the Medvedev-Putin swap was announced may be the chink in the ruling powers’ armor:

“They can’t be blamed, based on their past data, for getting it wrong,” said Fiona Hill, a Brookings Institution scholar who is studying the role of public opinion in Russian politics. “But something has changed. The biggest problem is that people have gotten fed up with them. If you look at long-serving leaders like Tony Blair and Margaret Thatcher, you see that their ratings tank in the latter half of the decade. It’s like the seven-year itch of politics.”

The Putin era is in its 12th year. Mr. Putin, who first became acting president in 1999, was elected to the job in 2000 and re-elected in 2004. Constitutionally barred from a third consecutive term, he became prime minister in 2008 and was succeeded as president by his protégé, Mr. Medvedev.

But any suggestion of ennui was drowned out by lights and bunting at Sunday’s nominating convention, where an 11,000-seat hall rang with chants of “Pu-tin! Pu-tin! Pu-tin!”

Nominating him for a term that would end in 2018, speaker after speaker focused on Mr. Putin’s role in taming the economic and political disorder of the 1990s, a compelling but increasingly distant memory, especially for young voters. Voters complaining about the current system, Mr. Putin said, were forgetting how much worse things were before he came to power in 1999.

“When a regular person has to deal with financial problems or some other problems in his day-to-day life, when he faces corruption and other small problems, he doesn’t remember the massive problems” of the past, Mr. Putin said. “The indignation that person has is usually turned against the current authority.”

Ms. Hill, who is studying fluctuations in poll numbers, said that Mr. Putin’s lagging approval ratings were very unusual. In past political cycles, his popularity has always peaked just before Election Day; previous drops, meanwhile, have been associated with specific events, like financial setbacks or disasters. The current dynamic, she said, is reminiscent of the late years of Lady Thatcher or Helmut Kohl, who also enjoyed great popularity early on.

“By the end, the brand is shot; you can’t rebrand it,” she said. Russian authorities, she said, “seem too confident that they can pull it off.”

Another analyst, Aleksei Mukhin, said the September announcement was “an improvisation” and a tactical error.