Putin Parts Way With ‘The Party Of Crooks And Thieves’ 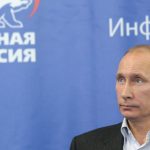 Analysts have been suggesting for some time now that Vladimir Putin was on the cusp of extracting himself from the fraud-riddled political body that is United Russia.  From the moment when the party’s popularity ratings began to sag, back in November of last year, speculation was rife as to how the party would tackle its apparent lack of appeal.  It seems that gradual dismantling is perhaps the preferred option.  The fate of beleaguered pro-Kremlin youth group Nashi, once a pet political tool of the powers-that-be, to which millions of rubles were dedicated, and which can now barely summon an automobile for a Victory Day rally is perhaps a case in point. We are, it would seem, witnessing the twilight of the structures that dominated the last Putin era.

Putin’s announcement yesterday that he would officially quit therefore came as no surprise.  Nor did his cunning plan to offload it onto consummate fall guy Dmitry Medvedev, whose pro-Western liberal credentials are unlikely to find much sympathy from the patriotic ranks of United Russia deputies.  Ria-Novosti offers an analysis pondering which path the party will be forced to take – that of reform or that of demise?

Party officials have been discussing a reform of United Russia since December, promising to divide it into three factions with distinct ideologies, likely liberal, conservative and patriotic. Media and analysts speculated that the party of power may be split into several parties or disbanded altogether.

Medvedev may make the final attempt to reform the party with its “rocky image,” said independent political analyst Pavel Svyatenkov.

But his chances of success are slim, pundits said.

“They’ll be gradually transferring political assets into some new structure while leaving the old one burdened with all the debts, much like it’s done in business,” Korgunyuk said.

“They’ll be building a new proper party from now on, as they’ve should have done from the get-go,” Korgunyuk said. He gave no firm timeframe, but Svyatenkov said United Russia’s fate is likely to be decided in the next two years.