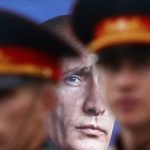 Many would believe that a hearty dose of saber-ratting never did an election campaign any harm, particularly in the case of a man who has been accused of seeking to cultivate a neo-sultanate.  In an article published in government daily Rossiyskaya Gazeta, Prime Minister Putin has unveiled plans for a $770 billion upgrade of the military, with reference to a nondescript yet powerful enemy: ‘New regional and local wars are being sparked before our very eyes […] There are attempts to provoke such conflicts in the immediate vicinity of the borders of Russia and our allies’.  One of the interesting aspects of this announcement is that it was President Medvedev who, last fall, first ventured and then vehemently defended plans for a major, and pricey, overhaul of the superannuated army.  This led to the well-documented spat with parsimonious then Finance Minister Alexei Kudrin, who maintained that such spending would be incompatible with Russia’s budget.  Kudrin, famously, resigned, signalling his apparent departure from mainstream politics, leaving the tandem, and their plans for a military spending spree, intact.  Unless it is that Medvedev, like so many political weapons, has become obsolete?