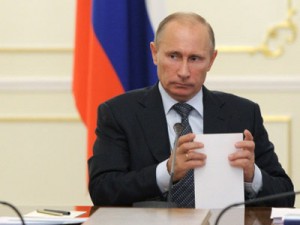 If anyone had doubts about Putin’s plans for Russia to retain superpower status, they obviously missed today’s news.  The Prime Minister has penned an article in Izvestiya newspaper in which he outlines his plans for a Eurasian Union, which would see the extension of the existing customs union with Belarus and Kazakhstan across the rest of the post-Soviet space.  Some have spoken of a USSR resurrection drive, fit for a man who might outdo Brezhnev in the leadership longevity stakes.  We could say however that the move is appositely timed, when EU accession is proving more and more onerous for the nations of the East.  The recent decision by the Netherlands and Finland to veto the entrance of Romania and Bulgaria into the Schengen zone, lamented by the Polish Foreign Minister as sign of Europe’s ‘broken promise‘ indicates that enlargement fatigue is florid.  Combined with that, the eurozone crisis and fears of irrepressible migration from North Africa have contributed to making the bloc’s borders all the more brittle. In the light of the Arab spring, EU integration has lost its luster for regional player Turkey, whose long-harbored European ambitions have gone on the backburner, whilst Ankara reorients itself towards post-Arab Spring North Africa. A reconfiguration of the geopolitical balance to Europe’s east is well underway, and perhaps Putin has spotted a gap to fill.  The last summit of the Eastern Partnership program, which is Brussels’ means of extending ties with the CIS nations of Armenia, Azerbaijan, Georgia, Moldova, and Ukraine ended in ‘chaos’, implying that attempts to hold these countries (which include diplomatic minefields of frozen conflict) within the European ambit may be an insurmountable challenge.  Meanwhile as Putin points out, Russia’s sphere of influence can never be too large.  Here’s a few of the details from Businessweek:

The Eurasian grouping will become an “indivisible part of the Greater Europe, founded on common values of freedom, democracy and market principles,” Putin said.

“An economically sound and balanced partnership between the Eurasian Union and EU can change the geopolitical and geo- economic situation of the entire continent and have a positive impact globally,” he wrote.

“We have a great inheritance from the Soviet Union — infrastructure, industrial specialization, a common language and cultural and scientific space,” Putin wrote. “It’s in our joint interests to use this resource for our development.”

Citizens will be free to live and work anywhere in the bloc and businesses will be able to register and base themselves in any of the three countries, he wrote. The union also will have a unified visa and migration policy.