Putin’s Man In The Urals 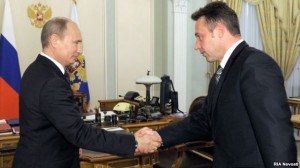 Acts of political theater may be Vladimir Putin’s stock in trade, but even so, eyebrows were raised last week when he made the eccentric decision to appoint a tank factory foreman as the Kremlin’s new representative to the Urals region.  Mecanic Igor Kholmanskikh won the leader’s attention when, at the height of the protests, he offered the then-Prime Minister to raise a gang and head to Moscow to fight off the unruly opposition.  Tom Balforth from RFE/RL provides a bit more background to this most rapid of ascent of the greasy pole and also compiles some analysts’ views on the matter:

Putin is demonstrating to everyone — the political elite, the business elite, his own circle — that he scorns and does not wish to consider himself subject to any new laws or norms,” says Sergei Moshkin, another Yekaterinburg-based political analyst.  “For him there are no political traditions. Henceforth, the only decision maker is him — for him this is allowed and it must not be discussed.”

Leonid Volkov, an opposition figure in Sverdlovsk Oblast, says Kholmanskikh’s promotion to foreman in August — just as the Kremlin was forming the All-Russian Popular Front to attract working-class support and three months before he spoke out on national television — was suspicious. He has suggested that the whole thing was scripted from the start.

“The idea to use this political tactic clearly came after the idea of the People’s Front,” Volkov says. “The idea to counterpose hipsters with the real working class was clearly established in the summer and by autumn it was already in action. The whole Kholmanskikh-Putin phone-in was just the realization of this strategy.”

Others, however, have dismissed the conspiracies and maintain that the Kremlin simply saw an opportunity in Kholmanskikh and exploited it.