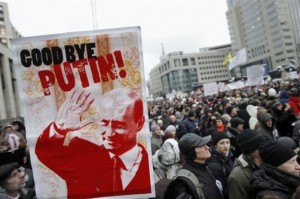 In 1830, another revolution was afoot in France. Talleyrand, on seeing the tricolour raised over Notre Dame, said, “We are triumphing!” He was asked, “Who are we?” “Quiet! Not a word. I will tell you tomorrow,” was the reply.

A sentiment that is not altogether dissimilar has emerged from the Moscow rallies of December, 2011. It is widely felt that the Russian politics face some tectonic changes, but the beneficiaries, and indeed, the nature of those changes are far from clear.

While it is unlikely that the rallies will usher in a new age of democracy and rule of law, the current regime will not be able continue as before. However, to understand at least the vector of changes one needs to understand the background of the current events.

As we have argued in our previous analysis, the personality of the next president of Russian was never at issue. A popular depiction of Dmitry Medvedev as some sort of a rival to Putin that would some day come into his own has always been wishful thinking, divorced from the reality of Russian power politics.

What was at issue during the 2011 (which in retrospect seems like a significant year, when a stage for later events was set), was the personality of the next Prime Minister to take Putin’s spot once he resumes the presidency.

There were three main contenders for the position – Igor Sechin, Alexei Kudrin, and Dmitry Medvedev. Contrary to the tropes of the nouveau Kremlinologists, the contest for the number two position was much more than a clash of personalities lacking a wider significance. The personalities have stood to real policy choices that Putin faced at the beginning of the last year. The choice between Sechin or Kudrin would signify the preference between the twin pillars of Putin’s political constituency – siloviki or technocrats with connection to big business.

The choice would signify not only a preference for one or another oligarchic grouping, but rather a choice of political orientation for the years to come – more emphasis on anti-Western rhetoric and stances, with ever closer snuggling to China, or the opposite policy, renewal of open season against businesses, Yukos-style, or a more orderly, civilized and legal-minded authoritarianism, associated with Anton Ivanov, current Chairman of the Highest Arbitrazh court. But, on the other hand, a more solid internal political basis in virtue of some variant of nationalism, or uncertain prospects of legitimacy based on even less certain integration into Western institutions.

Even if Putin thought that his opting for Medvedev would avoid committing himself to any of the alternatives (and continue the balancing act between the two parts of his political base), he was mistaken.

It did not help that the choice of Medvedev was accompanied by a clumsy humiliation of both camps. In the beginning of the year, Sechin was visibly downgraded as the result of the BP affair. In retrospect, it is abundantly clear that the main architect of the plot was Putin himself. Next came the turn of Kudrin, who was very publicly humiliated and sacked by Medvedev, whom Kudrin clearly had regarded as a non-entity. Thus, far from being perceived as a balancing act, the choice of Medvedev was taken across the Russian political spectrum as an authoritarian power grab by Putin, a self-aggrandizement at the expense of his traditional political constituencies. The perception was confirmed by the manner in which the future presidency of Putin was announced, at a gigantic rally of the United Russia party, esthetically reminiscent of the worst totalitarian political shows of the last century. Even if it is still a rhetorical overkill to seriously liken Putin with the twentieth century dictators, the September rally seemed to demonstrate where his political preferences lie.

Suddenly, apart from the institutional PR professionals, nobody seemed to want Putin to come back. Whispers of his increasing irrationality became a popular and open talk of the Moscow chattering classes.

And then came the crudely falsified Duma elections and the ensuing protests.

However, Putin is far from irrational. His motivation cannot be reduced to issues of venality and a search for personal security, as many, following Stanislav Belkovsky, suggest. His main political project, restoring Russian political (if not necessarily formal legal) control of Kremlin over the territory of the former Soviet Union is not nearly fulfilled. Suddenly, his political future and the pet project seem uncertain. After the collapse of the Soviet Union and regime changes in numerous countries after the beginning of the nineties, no one is under the illusion that political power in Russia is safe in the face of a massive political protest.

Are the protesters significant? Those who assess their influence by numbers or demographic percentages miss the point, a mistake made again and again over the past century of revolutionary upheavals. While the protesters may not constitute the arithmetical majority, they are setting the framework of the national political discourse, while by the hour Putin has been losing his ability to determine the national political agenda. He of course is perfectly aware of this precipitous change of his relative political standing.

So what is Putin’s strategy? Again, his most important steps have been largely ignored by the Western media. Although he has attempted to restore his position with the appointments of loyalists, the previous political configuration may be unattainable.

Big business has already lost faith in the ability of Putin to protect its positions abroad, as exemplified by the recent troubles of Severstal in the USA. On the other hand, internally, Putin has been unwilling or unable to stem the tide of corruption that has become the principle political issue for both the protesters and big Russian businesses, making close allies out of them.

In short, economic elites in Russia now perceive Putin as a significant strategic liability, and would be happy with most of the alternatives.

Thus, Putin moved to recruit the two constituencies for which the all-pervasive corruption is not a priority issue – namely, siloviki and siloviki-related nationalists.

In line with this, Putin moved to upgrade Sergei Ivanov, former Minister of Defence, who stayed loyal despite being demoted within the Russian real power structure before. Obviously, the theory (dubious) is that Ivanov would be seen by siloviki as their new representative, instead of still downgraded Sechin.

Even more significant is the appointment of Dmitry Rogozin, who was called back from Brussels where he has been the Russian Ambassador at NATO, to a highly influential political post, giving him in effect a stranglehold on Russia’s military strategy.

Rogozin is clearly the politician to watch. In contrast to almost all faces of the Putin’s regime, he is a real politician, ambitious, with a clear political agenda, well-known and taken seriously by the West. While it is uncertain the siloviki would see Ivanov as their true delegate, Rogozin certainly has the political capacity of rallying important circles of civilized Russian nationalism around Putin. Of course, it is not clear that he would be willing to expend his political capital for Putin’s cause.

What will come next? It is futile to engage in predictions in the current fluctuating situation where most important players are perhaps still biding their time and have not revealed their hand.

However, it is clear that it is too early to discard Putin. While seemingly catering to his perceived political constituencies, his most significant recent appointments concern promotion of people who are personally loyal. Thus, it is not clear that the important stakeholders in the regime beyond the personal coteries, would not decide that the best option would be to continue maintain the current regime at the expense of getting rid of its creator.

Clearly, Putin has more to fear from his own comrades that from the protesters.