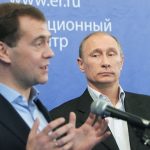 President Medvedev may have felt himself gracefully obscured over the past few weeks, while the focus of United Russia’s dwindling popularity has been placed upon his tandem partner, Vladimir Putin.  At the moment talk abounds of how the national leader has lost his Midas touch, with abundant attention given to why he has lost the epithet of the ‘people’s darling, as Vladimir Pozner puts it.  His counterpart Medvedev, meanwhile, has been spared too many direct hits, able to use his habitual reformist rhetoric to praise the manifestation of ‘democracy’ that was Sunday’s result.  It will not be long, some say, before Putin identifies that the most convenient way to deflect the negative attention on him, will be to place Medvedev squarely in the line of fire.  From Bloomberg:

The president sacked Kudrin in October after the finance minister, who is well-respected by investors, criticized him for increasing military expenditure, warning that spending was approaching a critical level if global economic conditions sour.

Medvedev lost political stature after surrendering his chance of a second term to Putin and paid the price in credibility, Lilit Gevorgyan, a London-based analyst at IHS Global Insight, said by e-mail yesterday.

“Putin is likely to hold his end of the deal and appoint Medvedev as his prime minister once he finalizes his return to the Kremlin,” she said. “But Medvedev’s term in the prime minister’s office is unlikely to be long,”