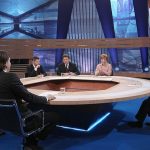 In his last interview as President of the Russian Federation, the transcript of which can be read here, Dmitry Medvedev told interviewers that ‘real advances in the development of civil liberties’ had been witnessed during his tenure.  He denied the existence of censorship, but did admit that during the period, corruption continued to flourish.   ‘[T]he session served as a metaphor for the Medvedev presidency: all the right theatre, a lot of sensible talk, but ultimately little substance’ says the Economist.  In the somewhat informal Q+A session, the outgoing President also assured those present that despite the switch with Putin, the tandem structure is in place for the long haul.  On the matter of a pardon for Khodorkovsky, he stated that an appeal was necessary for clemency to be considered.  He also offered his verdict on Oleg Shein’s hunger strike in Astrakhan: ‘These ‘hunger games’ remind me of a mediocre Hollywood blockbuster‘.

Using some of her prize money from the Goldman Environmental Prize, Khimki forest defender Yevgenia Chirikova has offered a reward of $34,000 for anyone who wins a court battle to protect three Moscow region forests.  A lawyer for the incarcerated members of feminist punk group Pussy Riot has said that an expert group has found no motive of hatred in the band’s ‘punk prayer’ and should therefore be released pending investigation. When questioned about the Pussy Riot affair in his final interview, President Medvedev described it as a ‘delicate topic’.  Upon the completion of her first visit to Russia, the UN’s special rapporteur on cultural rights, Farida Shaheed, has urged Russia to improve its protection of the diversity of citizens and their ability to create a cultural life.  CNN anchor Christiane Amanpour has interviewed former Soviet President Mikhail Gorbachev on Russia’s ‘fake democracy’.

An organizer of an anti-corruption meeting in the Volga city of Cheboksary has apparently been detained for throwing eggs at the building of the Regional Prosecutor General’s Office.  The Guardian’s Miriam Elder wonders why Putin spokesman Dmitry Peskov picked her red tape article as a prompt for verbal sparring as opposed to any other.

Georgian President Mikhail Saakashvili has told the press he would be willing to resign if Russia withdraws its troops from the separatist regions of Abkhazia and South Ossetia.  Medvedev warns against demonizing the US.  Cybersecurity – a new theater for Moscow-Washington cooperation?