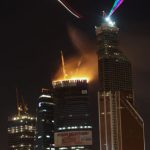 The ‘For Fair Elections’ opposition group, thwarted in their plans to hold their ‘White Square’ protest on Sunday, have unveiled plans to hold an event called ‘White Metro’ at Moscow’s Ploshchad Revolyutsii station.  The Sofia Echo has an interview with OSCE observer Daniel Stefanov discussing the (un)fairness of the presidential elections.  Top gay activist Valery Sozaev has told a Moscow news conference that the new St Petersburg anti-gay propaganda law is an attempt ‘to legalize homophobia’.  Ria-Novosti reports that some members of the Kremlin council of human rights agree.   A group of gay rights activists have solicited St. Petersburg City Court to throw the bill out.  ‘[T]he fight against homosexuals deflects attention away from the real enemy of Russia that the authorities have no interest in fighting — corruption.’  Estonian President Toomas Hendrik Ilves has attended a concert in Tallinn in support of the arrested members of punk group Pussy Riot, at which Kremlin and music critic Artemy Troitsky was also present.  Further analysis of the weekend’s opposition victory in Yaroslavl is emerging, with many wondering if it will set a precedent.   Ria-Novosti reports that ruling party United Russia is ‘scrambling to “reinvent” itself to cope with fierce future competition’.  A new survey by the Levada Center of 1,600 urban and rural citizens from across Russia has found that 75% of Russians have never heard of opposition heavyweight Alexei Navalny.

In the republic of Tatarstan, 66 hidden cases of police abuse have apparently been uncovered following a high-profile death in custody last month.  President Medvedev apparently disagrees with the presidential human rights council’s view on pardon of convicts in questionable cases, among them Mikhail Khordokovksy.  Moscow’s Tverskoy court has rejected a suit by Platon Lebedev, the business partner of the jailed Yukos founder, who claimed his three-month detention in custody in 2010 was illegal.  RFE/RL’s Brian Whitmore considers recent insights offered by former presidential adviser Gleb Pavlovsky into the Putin-Medvedev swap of September 26 last year.

Foreign Minister Sergei Lavrov has criticized initiatives suggested by some of the countries in the Friends of Syria People group as contrary to the Syrian peace plan outlined in the UN-backed Annan Plan.  Russia’s foreign minister also strongly warned that any pre-emptive strike against Iran would violate international law.

A failure to de-ice the airplane may have been the cause of yesterday’s jet crash in Siberia which killed 31 people.  The most recent air traffic disaster has prompted an internet petition to oust Transportation Minister Igor Levitin, the Moscow Times reports.  A fire has broken out at the Moscow skyscraper ‘Vostok’ destined to become Europe’s tallest building.  No injuries were reported.  A fire at a market warehouse, also in the capital, has left 12 people, apparently migrant workers, dead.

PHOTO: The skyscraper that caught fire will be Europe’s tallest building when completed. (Sergey Savostyanov/AP)