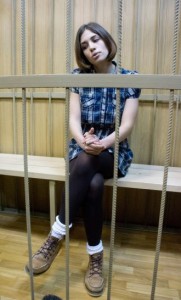 Whilst the lawyers of three members of punk agitators Pussy Riot have asked a Moscow court to acquit their clients, the state prosecutor, refuting claims the case is politically motivated, has asked the court to sentence the three women to three years in prison.  Singer Madonna has given a six-minute speech in support of the girls and in defence of freedom of speech at her Moscow concert.  121 members of the German Bundestag have sent a letter to the Russian Ambassador to Germany, Vladimir Grinin, defending the women.  See here a viral video of Vladimir Putin’s stunned response to an affectionate reverence from an Orthodox priest.  Protest-inclined rock musician Andrei Makarevich has written an open letter to the President, decrying corruption levels in Russia.  Putin has responded by arguing that the blame lies as much with the business class as the authorities.

After 8 years in prison, former Yukos Deputy Manager Alexei Kurtsin has apparently been released on parole.  Ria-Novosti reports that the sentence of Platon Lebedev, business partner of the company’s founder Mikhail Khordokovsky, has been reduced by 3 years and 4 months.  Brian Whitmore examines the latest phase in the battle between Alexei Navalny and Alexander Bastrykin, with each one’s brand identity at stake.  Social networking platform Vkontakte has heeded the complaints of the LGBT community and agreed to allow members to indicate that they are in same-sex relationships.

Armenia’s national airline Armavia, the first company to purchase the ill-fated Sukhoi Superjet 100, has said it wants to return the aircraft to the manufacturer because of technical problems.  According to Alfa Bank and UralSib Financial Corp., Moscow is refusing to acknowledge the gravity of the risks posed by global financial uncertainty and the volume of capital flight from the country this year.  After investors failed to meet a deadline for an agreement on the major Shtokman gas project, Norwegian oil giant Statoil has handed back shares but pledged nonetheless to stay in talks over the project.

PHOTO: Nadezhda Tolokonnikova, one of three defendants in the Pussy Riot case, sitting in a courtroom cage during an earlier hearing at another Moscow court. (Vladimir Filonov / MT)