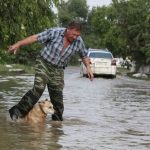 TODAY: Worst flooding in decades kills 171 people in Krasnodar region; amid devastation residents complain that authorities failed to warn them; Putin flies to the scene; declares day of mourning. Sanctioned rally in St Petersburg ends with arrests of Udaltsov, Kurnosova and around 30 participants; controversial NGO bill approved along with Internet extremism bill; plans to recriminalize libel signal blow to freedom of speech.  Could Pussy Riot be freed today?  US and Russia lock horns over Syria

The death toll continues to rise following major flooding in the Krasnodar region; 171 fatalities is the latest figure.  More than 12,000 people have been affected and 254 houses completely destroyed.  Residents of Krymsk, the worst affected city, complained that the authorities had opened reservoirs at night with no warning to citizens, causing mass destruction.  The Independent reports ‘one tearful resident’ telling reporters, ‘Of course this tragedy could have been prevented […] They don’t care about us. They didn’t warn us. Nobody came to save us’.  On Sunday President Putin flew to Krymsk and was seen ordering investigators to find out whether local authorities had performed the correct procedures in the event of the emergency; a criminal probe has apparently been opened.  Reuters considers how flying to disaster scenes is an integral part of the Putin’s auto-mythologizing.   The President declared today a day of mourning for the flood victims, and for the 14 Russian pilgrims who died on the weekend’s bus crash in Ukraine.

Around 130 people have participated in a sanctioned opposition rally in St Petersburg.  Although described as ‘peaceful‘, ten participants, including leaders Sergei Udaltsov, and Olga Kurnosova, were reportedly detained, and following this, around 20 of Udaltsov’s supporters were apparently arrested.  Russia’s lower house of parliament has initially approved the bill that would obligate internationally-funded NGOs to re-register as ‘foreign agents’.  The move has prompted a wave of criticism about the bill’s redefining of ‘political activity’; ex-Finance Minister Alexei Kudrin has noted with disapproval that ‘now even appeals to build ramps for disabled people might be considered a political activity’.   The State Duma also approved in a first reading legislation to curb ‘extremist’ content on the Internet.  The Other Russia looks plans to re-criminalize libel, a rolling back of Medvedev’s attempts to broaden freedom of speech.  The lawyer for feminist punks Pussy Riot is hopeful that the women may be released today.

Whilst a proposed relaxing of visa regimes heralds a positive step in bilateral ties, Washington and Moscow continue to spar over Syria.

PHOTO: A man and a dog trying to cross a flooded street in Krymsk on Sunday, July 8, 2012.  (Eduard Korniyenko / Reuters)