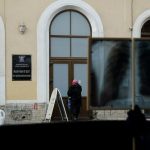 President Putin has signed into law the bill which would significantly increase the potential fines for those involved in unsanctioned rallies.  ‘In our law there is not a single clause that is harsher than the measures envisaged by similar laws’ in France, Germany and Spain, the President claimed in televised remarks.  Police in St. Petersburg have detained 10 participants in a flashmob engaged in a pillow fight.  United Russia as a whole may sue anti-corruption activist Alexei Navalny for the term he coined to describe the ruling party:  ‘the party of crooks and thieves’.  Tomorrow 70,000 police officers and more than 9,000 soldiers will be apparently be deployed for the June 12 holiday in anticipation of opposition protests.  United Russia’s candidate has won the mayoral elections in the eastern Siberian city of Krasnoyarsk.

On Friday, Russia’s Foreign Minister Sergei Lavrov expressed increasing concerns about the conflict in Syria, but reaffirmed that the Kremlin would not advocate outside force.  Lavrov added that Moscow is not opposed to President Bashar al-Assad’s departure, but only if it is decided by Syrians themselves.  He said the escalation of the conflict has prompted the ‘urgent’ need for an international conference to pressure both sides.  Human Rights Watch has implored France to disallow Russia’s state-owned arms exporter Rosoboronexport from taking part in the upcoming EUROSATORY 2012 arms exhibition in Paris in a stand against its weapons shipments to Syria.  The Defense Ministry has announced the successful test-fire of an intercontinental ballistic missile from a military field in Russia.

European soccer governing body UEFA has opened disciplinary action against Russia following incidents of racism and violence by fans at the Euro 2012 championship, prompting the Russia’s soccer federation to issue a warning to its supporters.

A new poll has found that after corruption, Russians apparently consider their leadership as one of the main factors stymying the country’s development.  Artist Artyom Loskutov has been fined $30 for the two pictures he displayed depicting Pussy Riot band members as the Virgin Mary.  Culture Minister Vladimir Medinsky has revealed his plans for Lenin’s pickled corpse.

PHOTO: A protester holding an X-ray at a rally decrying a lack of TB medicine at St. Petersburg’s city health department. (Aleksey Sharipoff)